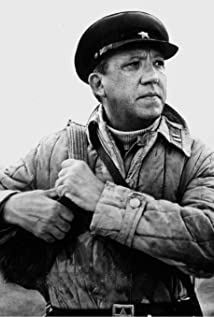 Yuri Nikulin was a Russian film actor, comedian, mime, and circus clown who was also Artistic Director of Moscow Circus and popular TV show host.He was born Yuri Vladimirovich Nikulin on December 18, 1921, in the town of Demidov, Smolensk province, Central Russia. His father, Vladimir Andreevich Nikulin, was a writer and director who worked for theater and circus. Yuri Nikulin inherited his fathers talents and had a dream of becoming an actor. The Second World War changed his plans as he was drafted in the Soviet Army in 1939 and served in a tank unit until 1946. After the war he came out a changed man. He could not get in any Soviet acting school for a few years, until he went to the Moscow Circus. There he was admitted after presenting a pantomime as a clown. He graduated from the Circus School in 1950, and started his acting career as a clown at the Moscow State Circus.Yuri Nikulin became best known for his roles in the comedies from director Leonid Gaidai. Their collaboration from 1961 to 1971 was one of the most productive actor-director partnerships in the history of Russian film. Their comedies were the highest-grossing box office hits ever in Russia and the former Soviet Union with the admissions of 222,800,000 in the first 15 months. The Diamond Arm (1969) was the #1 top grossing Russian box office hit ever with theatrical admissions over 76,700,000 in the Soviet Union in 1969. In a 1995 national poll in Russia, The Diamond Arm (1969), starring Yuri Nikulin was voted the best Russian comedy ever.Nikulin's effortless style and precise delivery, as well as his mastery of timing and his hilarious masks made him an outstanding comedian, arguably the best Russian comedian ever. Nikulin showed his range in a variety of genres from slapstick comedy to romance and war drama. His most popular film partners were Georgiy Vitsin, Evgeniy Morgunov, Natalya Varley, Rolan Bykov, Anatoliy Papanov, Sergey Filippov, Mikhail Pugovkin, Aleksandr Demyanenko, Leonid Kuravlyov, Andrey Mironov, Evgeniy Evstigneev, Vasiliy Shukshin, Vyacheslav Tikhonov, Sergey Bondarchuk, Nikolay Burlyaev, Viktor Pavlov, Boris Novikov, Vladimir Etush, Saveliy Kramarov, Nikolay Grinko, and many other notable Russian actors.Yuri Nikulin received popular and critical acclaim for his leading and supporting roles in such films as 'Andrei Rublev' (1961) by director Andrei Tarkovsky, They Fought for Their Country (1975) by director Sergey Bondarchuk, 'Stariki-razboyniki' (1971) by director Eldar Ryazanov, 'Chuchelo' (1983) by director Rolan Bykov, 'Kogda derevya byli bolshimi' (1961) by director Lev Kulidzhanov, '12 stulev' by director Leonid Gaidai, 'Dvadtsat dney bez voiny' (1976) by director Aleksey German, and many other memorable works in film. Nikulin's recording of the theme song from The Diamond Arm (1969), especially his delivery of such lines as "We care less" and "We are fearless" made it a popular hit in the 60s and 70s Soviet Union.Nikulin was among very few comedians who could continue laughing in the face of the Soviet system without any fear of being punished. Even the toughest hard-liners knew that without his humor the everyday life of many millions would be totally unbearable. His genuine talent endured the country's worst times with a smile. He could make people smile anytime and anywhere; even after the collapse of the Soviet Union, when the bloody communism was replaced with the no less bloody Russian capitalism. During the 1990s Nikulin hosted 'Bely Popugai' (aka.. White Parrot), a hilarious TV show where he gathered the crème de la crème of Russian comedians.The Moscow State Circus on Tsvetnoi Bulevard was the main workplace for Yuri Nikulin, where he had a career spanning about 50 years. He was awarded the honorable title of the National Artist and received numerous decorations for his achievements as an actor. Yuri Nikulin died after an open heart surgery, on August 21, 1997, in Moscow, and was laid to rest in the Novodevichy Monastery Cemetery, among the tombs of Anton Chekhov, Mikhail A. Bulgakov, Nikolay Gogol, Nikita Khrushchev, Sergey Bondarchuk, Anatoliy Papanov, and other Russian culture luminaries and historic figures.

They Fought for Their Country

The Criminal Shall Not Escape