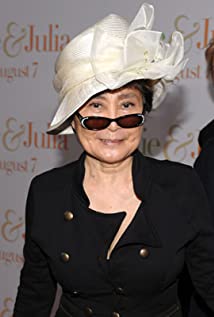 Yoko Ono was born on Saturday, February 18th, 1933, in her ancestral estate in Tokyo, Japan. Her father, Eisuke Ono, was the descendant of a 9th Century Emperor of Japan. Her mother, Isoko Yasuda Ono, was the granddaughter of Zenijiro Yasuda, the founder of Yasuda Bank. Yoko was two years old when she was brought to California, and joined her father for the first time. She returned to Japan before WWII and survived the bombings of Tokyo in 1945. Yoko went to school with Emperor Hirohito's two sons. Though boys and girls were separated, Yoko was visited by Emperor's son Yoshi, and in turn she visited the boy's school in defiance of the rules. In the early 50s she and her parents moved to New York. She went to Sarah Lawrence College, where she was particularly adept in music, with her perfect pitch and untamed creativity. She married a Julliard student, Toshi Ichiyanagi, and moved to Manhattan. Her admiration with Franz Kafka, Vincent van Gogh, and Arnold Schönberg gave root and was fertilized by the New York avant-garde scene. In 1960, Yoko Ono & her friend La Monte Young staged the legendary loft events on Chambers Street. She also provided the loft for John Cage and his ground-braking classes of experimental music. She collaborated with Karlheinz Stockhausen, Nam June Paik, George Maciunas and Fluxus. Yoko cut herself from her parents and was on her own, working as a waitress, an apartment manager, and a music teacher in New York's public schools.In 1962, after separating from Toshi, she gave in to her parents and returned to Japan. There, she heavily suffered from a clinical depression, and was locked up in a mental hospital. Anthony Cox went to Japan and managed to release Yoko Ono from captivity. She married Cox in Tokyo, later in the year, and their daughter, (as she became a mother), Kyoko, was born on Saturday, August 3rd, 1963. Cox became her artistic assistant. But in 1964 they separated and Cox returned to New York. Yoko joined him later in 1964 with Kyoko. She dreamed up the concept for 'Bottoms' (1966), completed only after 365 friends and volunteers provided their naked buttocks for close-ups. Her ad was "Intelligent-looking bottoms wanted for filming. Possessors of unintelligent-looking ones need not apply." Yoko promoted 'Bottoms' (1966) by being tied to a bronze lion in London's Trafalgar Square. While there, she first met her future husband-to-be (also 3rd & last), John Lennon at her art show in London on Wednesday evening, November 9th, 1966. At first they were very impressed with each other's intellect, personalities & everything else followed later. They married. John was lambasted by the British public. Yoko lost her daughter Kyoko (second ex-husband Cox kidnapped Kyoko in 1971 & hid her with an alias name Rosemary in the cult The Walk) for 27 years. Finally in 1998, Yoko and Kyoko reunited. John and Yoko were together 24/7 for six years until their fifteen-month break in 1973-74. Back together again, they sustained attacks from the media, politicians and all kinds of harassment. John and Yoko created art, music & had a son, Sean Lennon, on Wednesday, October 9th, 1975. They nourished each other's artistic nature with enough humor to survive through almost everything. Until Yoko Ono became a widow!

It Was Fifty Years Ago Today! The Beatles: Sgt. Pepper & Beyond

The Being Experience: The Prologue

Who Is Harry Nilsson (And Why Is Everybody Talkin' About Him?)

All You Need Is Klaus