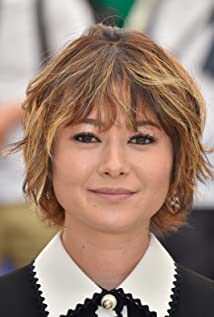 At her young age, Yoko Maki is already a well-rounded actress. 2001 proved to be a busy year for the young actress, beginning with her film debut at the age of 19, in the film Drug, directed by Hiroshi Sugawara. This was quickly followed by Pelican Road. More attention was then garnered with her role as Aya in the highly modernized remake of the Japanese vengeance film Lady Snowblood, re-titled as The Princess Blade. Not one to be confined solely to the screen, Maki spent 2002 acting on stage: first in her highly acclaimed performance in "Cross", produced by the Asagaya Spiders and directed by Keishi Nagatsuka, and second in the November 2002 Third Stage Show series production of "This Time It's Real", directed by Kyoichi Itagaki. 2003 saw a return to form for Maki, as she appeared in the sequel to the groundbreaking cult hit Battle Royale, Battle Royale II, as the member of one of the "Wild Seven." With her fan-base and critical acclaim growing, Maki continued to live up to such praise by keeping busy in 2004 with roles in films such as Shimotsuma Monogatari, Ren-ai Shousetsu, Koibumi Biyori, and Kansen. 2004 would also be the year of three great accomplishments for the then 22 year old. First, there was her role in the short film, Do Androids Dream of Electric Santa? directed by Hirohisa Sasaki, which saw its debut at the American Film Market. Second, was her work as an on location reporter in Thailand for the television documentary, Ururun-Taizaiki. Third and most exciting of all, was her role in Takashi Shimizu's big budget Hollywood film The Grudge, which was a remake of his original Ju-On: The Grudge, the third of the Japanese Ju-On horror film series. Starring American actors Sarah Michelle Gellar and Bill Pullman, The Grudge was at the top of the U.S. film box office for two weeks straight upon its release. Maki stood out amongst the cast in her first film introduction to American audiences as the doomed caretaker/nurse, Yoko, whose grim fate has left an indelible impression. Come 2005, more film opportunities opened up to Maki as she starred in more principal roles, starting with Pattchigi!, which garnered awards such as the 9th Pusan International Film Festival "A window on Asian cinema" and the 17th Tokyo International Film Festival Official Invitation. More roles followed in the films In the Pool, The Summer Time Machine Blues, and A Rain Town. When not appearing on the screen and stage, Maki keeps busy with work on numerous television dramas such as "The Tokyo Friends" among others, and appearances in commercials. An avid film fan herself, Maki enjoys watching films in her spare time, as well as keeping active in track and field sports and wire action. As time marches on, Maki continues to keep busy as more and more prospective film and television work opens up to her. And with such a strong work ethic and dedication to perfecting her craft in all mediums, Yoko Maki has a bright, promising, future ahead of her.

The Blood of Wolves