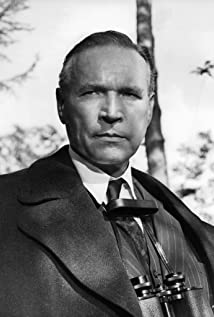 Born in Nuremberg on February 27, 1910, the son of a school teacher, well-known German actor Wolfgang Preiss started studying philosophy and theatre sciences alternately (including dance training) and made his stage debut in 1932 in Munich. He appeared in many theatres throughout his country in the 30s including Heidelberg, Bonn, Bremen, Stuttgart, Baden-Baden and Berlin.Beginning in a couple of early 1940s German films, WWII interrupted Preiss' movie output for quite some time, but, in many ways, the war never left him, for he would continue playing war-time colonels, generals, and field marshals for the duration of his prolific career.Following more theatre and radio work, Preiss returned to post-war German filming and was seldom seen out of uniform with a mass of pictures including Deadly Decision (1954), The Plot to Assassinate Hitler (1955) (starring role), The Cornet (1955), Anastasia: The Czar's Last Daughter (1956), Stresemann (1957), Sharks and Little Fish (1957) and I Was All His (1958). His diabolical tendencies also lent to his casting as the title criminal mastermind in a series of mystery films: The 1,000 Eyes of Dr. Mabuse (1960), The Return of Dr. Mabuse (1961), The Invisible Dr. Mabuse (1962), The Terror of Doctor Mabuse (1962) and Dr. Mabuse vs. Scotland Yard (1963).Preiss continued to keep his Nazi uniform starched and pressed as he branched out internationally for such 1960's war films as The Counterfeit Traitor (1962), The Longest Day (1962), The Cardinal (1963), The Train (1964), Von Ryan's Express (1965), Is Paris Burning? (1966), Anzio (1968) and Battle of the Commandos (1969). As the nemesis of such American heroes as William Holden, Burt Lancaster, Frank Sinatra, Robert Mitchum and Peter Falk, he moved into the next decade with portrayals of Rommel in Raid on Rommel (1971) starring Richard Burton and Field Marshal Von Rundstedt in Richard Attenborough's A Bridge Too Far (1977) which featured an international star cast.Preiss would appear in over 100 German and continental productions in his lifetime. Other popular filming would include featured roles in The Salzburg Connection (1972), The Boys from Brazil (1978), Bloodline (1979) and The Formula (1980). In his twilight years, Preiss turned more and more to TV as part of the ensemble casts of the quality miniseries Wallenstein (1978), The Winds of War (1983) and War and Remembrance (1988). He ended his career with a role in the French adventure movie drama Aire libre (1996).Preiss died on November 27, 2002, at the age of 92, as the result of a fall. Married three times, he was survived by his third wife, Ruth, whom he married in 1955.