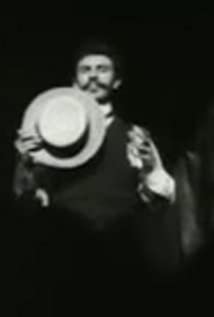 Born in France to British parents, William Kennedy-Laurie Dickson stayed in that country until age 19, when he, his mother and sisters (their father had died sometime before) returned to Great Britain. Once there, Dickson--in an early indication of his lifelong fascination with science and mechanics--began a correspondence with Thomas A. Edison in the US, asking for employment, but was turned down. Eventually Dickson's family moved to the US, and several years afterward Dickson actually did land a job with Edison, and soon proved to be a trusted and valuable associate. He worked closely with Edison on the development of both the phonograph and, closer to Dickson's heart, the motion picture (it was Dickson who eventually decided that motion picture film should be 35mm wide; he also developed the emulsion process used in the film).In 1889, while Edison was on a trip to Europe, Dickson set up a building in which to conduct his "photographic experiments", the forerunner of the first motion picture studio. In 1890 he and his chief mechanical assistant, Eugène Lauste, showed the results of their experiments, produced on a cylindrical system called the Kinetoscope: a short film called Monkeyshines, No. 1 (1890), featuring one of his assistants. Improvements on this system continued, and in 1891 patents were filed on an improved camera called the Kinetograph. Edison's plans to exhibit the new system at the Chicago World Exposition necessitated not only the production of many new machines but also films that could be shown on them, and the result was the building of a film studio at Edison's laboratory in West Orange, NJ, which was nicknamed "The Black Maria" because it was constructed of wood covered with tar-paper, resembling the police wagons of that era which were known by that nickname.However, even with Dickson's perfecting of a new version of the Kinetograph camera, not enough films were completed to be shown at Edison's planned exhibition. Dickson, however, did manage to persuade many stage and vaudeville stars to appear in films shot at the West Orange studio, and in the following years the studio was a beehive of activity, with some of the biggest names of the era making short films there. However, friction between Dickson and an executive appointed to oversee Edison's businesses soon broke into open conflict, resulting in Dickson's angrily leaving Edison's employ in 1895. He then joined forces with two businessmen in the development of a way to exhibit films differently than Edison's peepshow-style Kinetoscope. The system eventually developed into what was called the Mutoscope, and the camera that was developed to take pictures for the Mutoscope was called the Biograph. This in turn developed into a filming and projection system that retained the Biograph name.In 1896 Dickson and three partners began the American Mutoscope and Biograph Co. (often referred to as just "Biograph", and generally considered to be the first major American motion picture studio) to produce and distribute films. Dickson produced and directed many of Biograph's early films, but by the turn of the century he had taken over management of the company's European branch, headquartered in England. He died there in 1935.

Panorama of Ealing from a Moving Tram

Pope Leo XIII Leaving Carriage and Being Ushered Into Garden, No. 104

Pope Leo XIII Being Carried in Chair Through Upper Loggia, No. 101