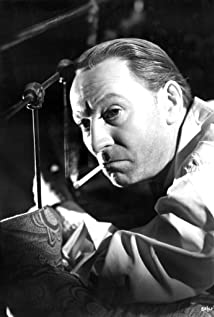 William Hartnell was born on 8 January 1908, just south of St. Pancras station in London. In press materials in the 1940s he claimed that his father was a farmer and later a stockbroker; it turns out that he had actually been born out of wedlock, as his biography "Who's There?" states.At age 16 he was adopted by Hugh Blaker, a well-known art connoisseur, who helped him to get a job with Sir Frank Benson's Shakespearean Company. He started as a general dogsbody--call-boy, assistant stage manager, property master and assistant lighting director--but was occasionally allowed to play small walk-on parts. Two years later he left Benson's group and went off on tour, working for a number of different companies about Britain. He became known as an actor of farce and understudied renowned performers such as Lawrence Grossmith, Ernest Truex, Bud Flanagan and Charles Heslop. He played repertory in Richmond, Harrogate, Leeds and Sheffield and had a successful run as the lead in a touring production of "Charley's Aunt." He also toured Canada in 1928-29, acquiring much valuable experience.On his return to England, Hartnell married actress Heather McIntyre. He starred in such films as I'm an Explosive (1933), The Way Ahead (1944), Strawberry Roan (1944), The Agitator (1945), Query (1945) and Appointment with Crime (1946).His memorable performance on the television series The Army Game (1957) and the movie This Sporting Life (1963) led to him being cast as the Doctor on Doctor Who (1963), for which he is best remembered. His son-in-law is agent Terry Carney. His granddaughter is Jessica Carney (real name Judith Carney), who authored a biography of her grandfather, "Who's There?", in 1996.

An Adventure in Space and Time

War Zone: The End of an Era

The Mouse That Roared

Shake Hands with the Devil

Footsteps in the Fog

The Holly and the Ivy