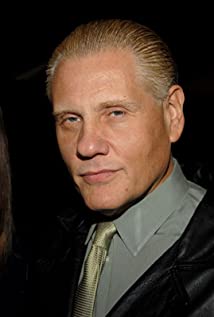 Dynamically entertaining heavyset US actor with piercing eyes, William Forsythe has a superb talent for playing some truly unlikable and downright nasty characters that dominate the films in which he appears! If you're cast as the hero against Forsythe's villain, then you have your work cut out for you, as Forsthye's raw energy and menace on screen is second to none. He started out in a couple of minor film roles and guest appearances in high-rated TV shows including CHiPs (1977), Hill Street Blues (1981) and T.J. Hooker (1982). He quickly moved into high-quality feature films, including playing a small-time hoodlum in Once Upon a Time in America (1984), an hilariously funny performance as a bumbling jail escapee alongside John Goodman in the knockout Raising Arizona (1987) and as a renegade soldier in Extreme Prejudice (1987).The energetic Forsythe portrayed comic book villain "Flattop" in Dick Tracy (1990), was foolish enough to tangle with vengeful cop Steven Seagal in the hyper-violent Out for Justice (1991) and locked horns with ex-NFL linebacker Brian Bosworth in the biker action film Stone Cold (1991). With his expertise in playing icy villains, Forsythe was perfect to portray Prohibition mobster Al Capone in the short-lived '90s revival of the classic '60s crime show, The Untouchables (1993), and he continued the motif of playing edgy, nefarious individuals in the thought-provoking The Waterdance (1992), the oily film noir piece Things to Do in Denver When You're Dead (1995), as real-life mobster Sammy Gravano, aka "The Bull", in Gotti (1996) and supporting another ex-NFL player's foray into film acting, when L.A. Raider Howie Long debuted in Firestorm (1998).Forsythe has remained perpetually busy in the new century with a plethora of feature film, telemovie and TV series appearances, and has developed a minor cult following amongst film fans for his attention grabbing dramatic skills - check out his performances in City by the Sea (2002), The Devil's Rejects (2005) and Halloween (2007).

God's Not Dead: We the People

Run with the Hunted