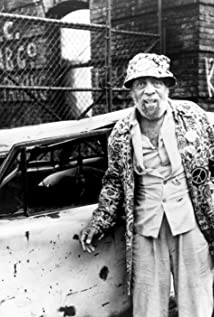 Noted for portraying characters older than his actual age, Whitman Mayo was in his early 40s in the early 1970s when he first played the sexagenarian "Grady" on "Sandford & Son" -- a role that popularized the expression "Good Goobily Goop!" Nearly thirty years later his "Grady" role had just about caught up with him in terms of age and, in terms of Americana, had assumed something of a cult status. In 1996, "Late Night with Conan O'Brien" hosted a tongue-in-cheek "Where's Grady" search for the actor who so well played the part. Though this single role tended to typecast his acting and contributions to the profession, Whitman Mayo did not let it define him. In fact, his professional growth took him some distance from the Watts junkyard of the ABC sitcom. He rounded out his career teaching drama at Clark Atlanta University in Atlanta, Georgia. He was born and grew up in Harlem and Queens, N.Y., moving at 17 to Southern California with his family. He served in the army from 1951-53, then did tours of study at Chaffey College, Los Angeles City College, and UCLA. He began doing a little acting at this time, but nothing stuck. He drifted and liked to boast that he played serious volleyball in Mexico for a year. During these times in his life of not being fixed in a career, he also worked as a probation officer counseling young people, picked grapes, waited tables, and other things for the railroad and a dairy, and not necessarily in that order. In the late 1960s, he joined the New Lafayette Theater repertory company in New York City and began settling down in an acting career. His call to "Sanford & Son" came shortly thereafter when a friend from the New Lafayette group who was by that time writing for Norman Lear recommended Mayo for a part in a single episode. His portrayal caught on and he lasted through the entire duration of the show, even filling in for Redd Foxx when Foxx took a leave. Having a plethora of experience with the tentative in his life, Mayo viewed his continuing success on the series as fleeting and ventured into other trades to assure financial stability; in 1975, for instance, he opened a travel agency in Inglewood, California. In 1994, "burned out," as he said, on Los Angeles, he continued to ply his trade in acting, but moved to Fayetteville, Georgia.

Of Mice and Men