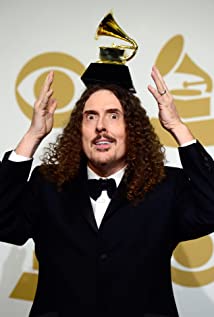 Takma İsimler: The Weird One, The Boneless Boy, The King of Parody

Few would have guessed that "Weird Al" Yankovic - who as a shy, accordion-playing teenager got his start sending in homemade tapes to the Dr. Demento Radio Show - would go on to become a pop culture icon and the biggest-selling comedy recording artist of all time, with classic song and music video parodies such as "Eat It," "Like a Surgeon," "Smells Like Nirvana," "Amish Paradise," "White & Nerdy" and "Word Crimes." Now in his fourth decade as America's foremost song parodist, he has been honored with four Grammy® Awards and fifteen nominations, including a 2015 win for his 14th studio album Mandatory Fun.Alfred Matthew Yankovic was born on October 23, 1959, in the Los Angeles suburb of Lynwood, to Mary Elizabeth (Vivalda) and Nick Louis Yankovic. He is of Yugoslavian, Italian, and English descent. He first took up the accordion when a salesman came around to solicit business for a music school. His parents decided on the accordion because of polka king Frankie Yankovic (no relation). As a child and young teen, Al watched a lot of television, which gave him much inspiration for his later work. He also became a fan of such musician/comedians as Allan Sherman and Spike Jones. He became especially acquainted with these musicians through the radio show of Barry Hansen, aka "Dr. Demento", which would later become a great source of publicity for his talents. After an extraordinary career at Lynwood High School, where Al graduated as valedictorian, he attended the California Polytechnic State University in San Luis Obispo to study architecture, a field he is said to have chosen because it was listed first in the catalog (although he has said that he really chose it on the advice of a guidance counselor). It was at Cal Poly that Al had a radio show and earned the nickname "Weird Al". Although he had sent tapes to Dr. Demento in the past, it was at Cal Poly where he recorded his first real published piece, a parody of the popular "My Sharona" by The Knack, called "My Bologna". After the astounding success of that song, forever to be known as the "bathroom recording" as it was recorded in the acoustically perfect mens' room, Al began his phenomenal career, which has spanned twelve albums, numerous compilations, a box set, movies, videos and edible underwear. He has also done a great deal to advance the cause of accordion-wielding weirdos, for which we can all be thankful.In addition to his 1989 cult hit feature film UHF, his late 1990s CBS Saturday morning series The Weird Al Show and numerous AL-TV specials he has made for MTV and VH1 over the years, Yankovic has remained a staple of film and television, from appearances on The Simpsons and 30 Rock to performing on the 2014 Primetime Emmy Awards. More recently he guested on ABC's Galavant (as a singing monk) and The Goldbergs (as the '80s version of himself). In the spring of 2015 Yankovic joined the fifth and final season of IFC's Comedy Bang! Bang! as its co-host and bandleader. Al can be heard as the voice of the title character in Disney XD's animated series Milo Murphy's Law. Additional voiceover work includes Gravity Falls, Wander Over Yonder, Adventure Time, My Little Pony: Friendship is Magic, The 7D, Teen Titans Go!, We Bare Bears, Pig Goat Banana Cricket, Uncle Grandpa, Voltron: Legendary Defender, Bojack Horseman, and the DC animated feature Batman vs. Robin. Other notable past projects include the 2009 themed attraction Al's Brain: A 3-D Journey through the Human Brain, featuring cameos by everybody from his mother-in-law to Paul McCartney. Two years later, Comedy Central broadcast and released the concert special "Weird Al" Yankovic Live: The Alpocalypse Tour, filmed at Toronto's venerable Massey Hall. Yankovic added "New York Times bestselling author" to his resumé in 2011 with the release of his children's book, When I Grow Up (HarperCollins), followed two years later by My New Teacher and Me! An animated series based on his children's books is being developed in partnership with the Jim Henson Company. 2012 saw the release of Weird Al: The Book (Abrams), an illustrated hardcover on Al's life and career, and in 2015 Yankovic became not only MAD Magazine's cover boy, but the first Guest Editor in their 63-year history. 2016 saw the release of George Fest: A Night to Celebrate the Music of George Harrison, featuring Al's live performance of "What is Life?" The past year has seen the June premiere of the Dreamworks animated film Captain Underpants, for which Al co-wrote and performed the film's theme song, and the release by NECA Toys of the second in its line of retro-clothed Weird Al action figures. In August, Al wrote and performed "The North Korea Polka (Please Don't Nuke Us)" on Last Week Tonight with John Oliver.In May 2017, the Hollywood Chamber of Commerce announced that Weird Al would be receiving a star on the Hollywood Walk of Fame. In November of this year, Legacy Recordings will release Squeeze Box: The Complete Works of "Weird Al" Yankovic,