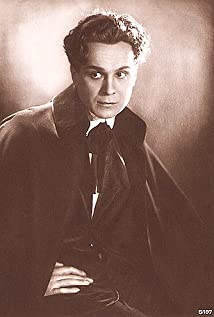 The tall, expressively-browed, rather stern-looking character actor Walter Rilla was educated at the University of Koenigsberg and first worked as a newspaper journalist, drama critic and story editor for the Berliner Theater. He acted on stage from 1921, making his screen debut the following year. He quickly established himself as a leading player in German and French films, often playing aristocratic roles, which demanded a certain amount of gravitas. Involved with leftist organisations and married to a Jewish wife, Rilla was inevitably forced to flee Nazi Germany for England in 1933.His breakthrough role in British films came courtesy of Alexander Korda, who was intent on casting him as Merle Oberon's brother Armand in The Scarlet Pimpernel (1934). This was followed by roles as Prince Ernest in Herbert Wilcox's period drama Victoria the Great (1937), and as the womanizing banker Roudine in False Rapture (1939). Thereafter came a succession of villainous roles. Though a British citizen from 1940, Rilla was unable to escape typecasting -- much like his compatriots Conrad Veidt and Peter van Eyck -- and his career was henceforth delineated by playing racketeers (Golden Salamander (1950)), Nazi propagandists (The Lisbon Story (1946)) and evil Eastern European potentates (The Great Manhunt (1950)).In addition to acting, Rilla sidelined as author of several BBC radio shows. Following his return to Germany in 1957, he began a new career behind the camera as writer/director of television plays. He also continued to act in just about anything, from prestige films (like Confessions of Felix Krull (1957) and Scampolo (1958)) to spaghetti westerns (Day of Anger (1967)); from Edgar Wallace potboilers (The Forger of London (1961)) to returning to his villainous ways as the evil genius Dr. Mabuse in several instalments of the popular franchise. In 1966, Rilla was awarded the prestigious Filmband in Gold for his service to the German film industry.

The Death Ray of Dr. Mabuse