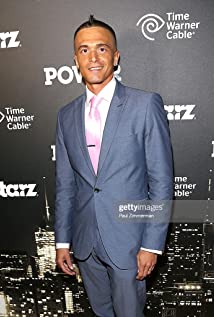 Vinicius Machado, named one of the fastest rising Latino talent on television today, was a soccer player and a capoeira dancer until his sophomore year in high school, when he joined his elective drama class; he is now an internationally known actor and producer for his documentary special on Planeta Brasil, an entertainment news channel on Globo.He was born Vinicius Ferreira Machado on July 12th, 1982, in Niteroi, Rio de Janeiro, Brazil. His father, Antonio Carlos Machado, was a tourist guide. His mother, Sueli Ferreira Machado, was a maid. Young Vinicius had a difficult upbringing, despite his strong family oriented background. Vinicius was bullied drastically when he first arrived in America. He wanted to play soccer professionally and dreamed of such a life since he can remember. But after a near death car crash in the year 2000, Vinicius dreams and ambitions of playing soccer ended as he became very depressed. He found acting a mentoring vehicle that allowed him to overcome his troubles, including the effects of being bullied. His acting debut came in the role of Robin Starveling in his High School Theatre production of Mid Summer Night's Dream. He fell in love with the stage and has never looked back. Vinicius found a track to run in, with the elements of love as his inspiration, honesty as his medium, and acting as his dimension.In 2005, at the age of 23, he moved to California in pursuit of a Hollywood career and found immediate success on Nickelodeon' Ned's Declassified School Survival guide, playing a foreign exchange student. Being a young actor however, he also worked as a host at Hard Rock Cafe and took side jobs to survive. Despite his quick rise in Hollywood, at that time, Vinicius was living in his car and had to eat out of the trash. That didn't stop him though. He worked harder and earned an astounding reputation in the film industry, being casted in: Golden Glove award winner, "Monster", The Celestine Prophecy, Get Smart, Fast Glass, Sunken City, Real Premonition, to name a few. He also strived to land big time roles in hit television shows such as; "The Shield, Cold Case, General Hospital, Flash Forward, CSI:Miami, NCIS, Southland, Sleeper Cell, The Shield, Eagleheart, Dark Blue, again to name a few. His resume is continually being updated. Vinicius has been hailed by Directors as "versatile with money making looks", and is sought after today as a valuable talent around the world.Vinicius' long and fruitful ability to turn one dimensional characters into three dimensional humans prepared him for the controversial role of Nomar in Curtis 50 Cent Jacksons' hit series, Power. He gained widespread recognition for the notable role of pedophile drug dealer Nomar. Vinicius went on to work on HBO' critically acclaimed hit series True Detective immediately following. Reaching another milestone with his career objective with True Detective. Working along side Rachel McAdams, Taylor Kitsch, Colin Ferrell, Rick Springfield, to name a few. He played Tony Chessani, a lose cannon with political ambitions who runs an underground porn enterprise catering to the elites. In speaking of his role as Tony Chessani he said; "I'm not afraid to go to real dark places. I embrace them actually. I've capitalized on it as an actor." He continues to explore and conquer the challenges and opportunities that are set out before him, especially those in perfecting his craft.Vinicius further established himself as one of Hollywood's merging House Hold name after co-starring in Sony's feature film Beautiful and Twisted (2014) opposite Rob Lowe, based on a true story. In June 2015 he won a Humanitarian award for his contributions to his community and charities as well as aiding unknown artists in the industry. He has voiced many radio spots, commercials, including a twelve hundred and some page book titled "Man from Lisbon" as both the narrator and characters. That solo audio book performance landed him a position as a House Hold voice over name at the Deyan Audio inc. Vinicius established himself as internationally known Latin heartthrob with charismatic looks, and was chosen to represent "The Organic Face" on a nation wide tour as one of their faces promoting the brand.Vinicius Machado hopes to inspire and train young people to be able to express their gifts and passion, as true to their hearts. He is committed to releasing creativity to others through his ways of expression, so that they may move with the same freedom. Vinicius will not settle for less then the best. Outside of his acting profession, Vinicius has been a passionate soccer fan and a staunch supporter of Feed the Children, World Vision and has been recently appointed as national spokesman for Stop Bullying Now Foundation. He enjoys traveling the world and speaking to kids to rise beyond mediocrity and adversity through the arts. He shares time between acting and producing, but he is also an established working writer, a profession he always envisioned embra