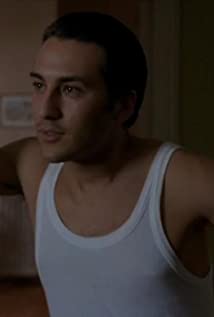 In 1992 he took by chance the small role of a "carabiniere" (sort of Italian policeman) in "Ladro di bambini" ("The stolen children"), directed by Gianni Amelio, one of the most acclaimed Italian movie of the decade and winner at Festival of Cannes. This role made him one of the biggest bets of Italian cinema. He didn't disappoint the expectancies and started studying drama. Two years later he got a bigger role, that of a gay smuggler in P. Corsicato's "Libera". The director made him the main character of his following, controversial and critically acclaimed "The Black Holes", in which he plays a homosexual voyeur.The same year he was chosen as one of the 14 more "promising" actors at Geneve's Festival.The following year he starred in "My Generation", directed by Wilma Labate, which received an Oscar nomination as Best Foreign Movie. In 1999 he was the protagonist of "Before Sunset" which triumphed at Annecy Festival and was considered by critics as the Italian "Pulp Fiction". After so many committed movies he played in a comedy in 2000: "Quello che le ragazze non dicono" in which he portrayed a singer (he actually sings, plays the piano and the guitar very well), and this remain his unique comical performance. In the new millennium he achieved other successes with "Marja's Love" and "The bankers of God". He has made also a lot of TV appearances and directed several independent shorts and one theatrical play.