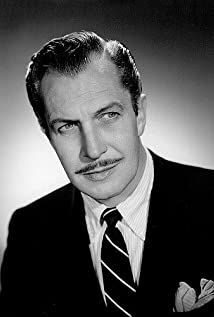 Takma İsimler: The King of the Grand Guignol, The Merchant of Menace, The Renaissance Man, Bing, Vincent II, The Master of Horror, The Candy Kid

Actor, raconteur, art collector and connoisseur of haute cuisine are just some of the attributes associated with Vincent Price. He was born of Welsh ancestry to prosperous parents ("not rich enough to evoke envy but successful enough to demand respect"). His uniquely cultivated voice and persona were the result of a well-rounded education which began when his family dispatched him on a tour of Europe's cultural centres. His secondary education eventually culminated in a B.A. in English from Yale University and a degree in art history from London's Courtauld Institute.Famously, his name has long been a byword for Gothic horror on screen. However, Vincent Price was, first and foremost, a man of the stage. It is where he began his career and where it ended. He faced the footlights for the first time at the Gate Theatre in London. At the age of 23, he played Prince Albert in the premiere of Arthur Schnitzler 's 'Victoria Regina' and made such an impression on producer Gilbert Miller that he launched the play on Broadway that same year (legendary actress Helen Hayes played the title role). In early 1938, he was invited to join Orson Welles 's Mercury Theatre on a five-play contract, beginning with 'The Shoemaker's Holiday'. He gave what was described as "a polished performance". Thus established, Vincent continued to make sporadic forays to the Great White Way, including as the Duke of Buckingham in Shakespeare's 'Richard III' (in which a reviewer for the New Yorker found him to be "satisfactorily detestable") and as Oscar Wilde in his award-winning one man show 'Diversions and Delights', which he took on a hugely successful world-wide tour in 1978. While based in California, Vincent was instrumental in the success of the La Jolla Playhouse in San Diego, starring in several of their bigger productions, including 'Billy Budd' and 'The Winslow Boy'. In 1952, Vincent joined the national touring company of 'Don Juan in Hell' in which he was cast as the devil. Acting under the direction of Charles Laughton and accompanied by noted thespians Charles Boyer, Cedric Hardwicke and Agnes Moorehead, he later recalled this as one of his "greatest theatrical excitements".As well as acting on stage, Vincent regularly performed on radio network programs, including Lux Radio Theatre, CBS Playhouse and shows for the BBC. He narrated or hosted assorted programs ranging from history (If these Walls Could Speak) to cuisine (Cooking Price-Wise). He wrote several best-selling books on his favourite subjects: art collecting and cookery. In 1962, he was approached by Sears Roebuck to act as a buying consultant "selling quality pictures to department store customers". As if that were not enough, he lectured for 15 years on art, poetry and even the history of villainy. He recorded numerous readings of poems by Edgar Allan Poe (nobody ever gave a better recital of "The Raven"!), Shelley and Whitman. He also served on the Arts Council of UCLA, was a member of the Fine Arts Committee for the White House, a former chairman of the Indian Arts & Crafts Board and on the board of trustees of the Los Angeles County Museum of Art.And besides all of that, Vincent Price remained a much sought-after motion picture actor. He made his first appearance on screen as a romantic lead in Service de Luxe (1938), a frothy Universal comedy which came and went without much fanfare. After that, he reprised his stage role as Master Hammon in an early television production of 'The Shoemaker's Holiday'. For one reason or another, Vincent was henceforth typecast as either historical figures (Sir Walter Raleigh, Duke of Clarence, Mormon leader Joseph Smith, King Charles II, Cardinal Richelieu, Omar Khayyam) or ineffectual charmers and gigolos. Under contract to 20th Century Fox (1940-46), Laura (1944) provided one of his better vehicles in the latter department, as did the lush Technicolor melodrama Leave Her to Heaven (1945) which had Vincent showcased in a notably powerful scene as a prosecuting attorney. His performance was singled out by the L.A. Times as meriting "attention as contending for Academy supporting honors".His first fling with the horror genre was Dragonwyck (1946), a Gothic melodrama set in the Hudson Valley in the early 1800's. For the first time, Vincent played a part he actually coveted and fought hard to win. His character was in effect a precursor of those he would later make his own while working for Roger Corman and American-International. As demented, drug-addicted landowner Nicholas Van Ryn, he so effectively terrorised Gene Tierney's Miranda Wells that the influential columnist Louella Parsons wrote with rare praise: "The role of Van Ryn calls for a lot of acting and Vincent admits he's a ham and loves to act all over the place, but the fact that he has restrained himself and doesn't over-emote is a tribute to his ability". If Vincent was an occasional ham, he proved it with his Harry Lime pastiche Carwood in The Bribe (1949). Much better w

Midnight Movies: From the Margin to the Mainstream

A Century of Science Fiction

The Thief and the Cobbler

The Heart of Justice