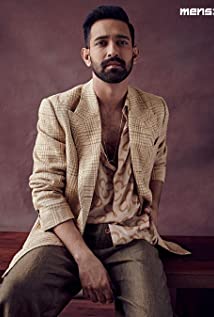 Vikrant Massey, a well-known Indian film and television actor was born on 3rd April 1987 in Mumbai (Maharashtra). Vikrant is great at doing more with less. Some of his most magical moments on screen are in projects where he had limited screen time, which is a trait common to gifted actors. He is indeed one of the most talented actors in India.He scored his successful professional gig with the TV show Balika Vadhu which aired on Color TV and he soon became a household name.Vikrant made his Bollywood debut in Vikramaditya Motwane's Lootera (2013) starring alongside Ranveer Singh and Sonakshi Sinha. His first lead role was in Konkona Sen Sharma's debut directorial project, A Death in the Gunj (2016) where he played a shy student. His effortless acting made him win rave reviews. Both the film and his impeccable performance won critical acclaim. It was for this movie he won the 'Best Actor' at Caleidoscope Indian Film Festival Award (2017) and a nomination for Critics choice 'Best Actor' at Filmfare Awards (2018).Vikrant had also starred in Meghna Gulzar's Chhapaak (2020), where he was the male protagonist opposite Deepika Padukone. For his power-packed role in this movie, he received the 'Best Supporting Actor' at Dadasaheb Phalke-DPIFF Award (2021)Some of his other notified films include Dil Dhadakne Do (2015), Half Girlfriend (2017), Lipstick Under My Burkha (2016), Ginny Weds Sunny (2020) opposite Yami Gautam, Dolly Kitty and Those Twinkling Stars (2019) opposite Bhumi Pednekar, a science fiction film, 'Cargo' (2020) opposite Shweta Tripathi, and Ramprasad Ki Tehrvi (2019). His performances in all these movies were applauded by the audience and critics alike.Vikrant has also been a part of famous web series such as Rise (2017), Mirzapur (2018), Broken But Beautiful (2018), Made in Heaven (2019), where he played a cameo and Criminal Justice (2019) where he played the lead role. His brilliant performance in 'Criminal Justice' bagged him the 'Best Actor' at the Critics' Choice Shorts & Series Awards (2019). He is ruling the digital space.In the past, he has been part of some famous TV shows such as 'Dhoom Machaao Dhoom' (2007), Baba Aiso Varr Dhoondo (2010), Dharam Veer (2008), Gumrah End of Innocence (2012), and Yeh Hai Aashiqui (2013), and 'Ajab Gajab Ghar Jamai' (2014), Qubool Hai (2012) (2013) where he played varied roles.He is also a trained and accomplished contemporary Jazz dancer and has worked with Shiamak Davar. He even acted as a choreographer on the show 'Dhoom Machaao Dhoom' (2007).He has an exciting lineup of movies which include Haseen Dillruba (2021), 14 Phere (2021), 'Yaar Jigari', Mumbaikar (2021), and Love Hostel (2021) working with some of the biggest banners that include Colour Yellow Productions, Eros International, Zee Studios, Red Chillies Entertainment, and RSVP movies.He is a sincere, talented, and steady actor who has plodded his way up. He is proof that talent, perseverance and merit can go a long way.His integrity and effective performances in films, web series and on television have earned him a loyal fan base.

Dolly Kitty and Those Twinkling Stars

Lipstick Under My Burkha