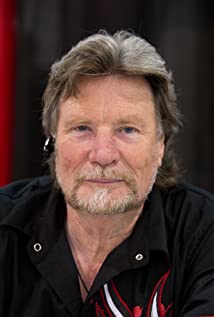 Strong-featured Australian actor Vernon Wells was born December 1945 in Rushworth, rural Victoria, to Eva Maude (Jackson) and Michael Wells. He initially worked in a quarry, and then as a salesman. He was noticed by casting agents and started to appear in Australian TV commercials, print ads, local Australian TV shows such as "Homicide" and "Matlock Police".His first cinema appearance was a minor role in Felicity (1978), a low budget, erotic fantasy film. However, Wells was then fortunate to be cast as the homicidal biker "Wez", in the big budget The Road Warrior (1981) filmed around Silverton near Broken Hill in outback New South Wales, Australia. It's the role for which he is probably best known to international audiences, as Wells portrays a psychotic, post apocalyptic gang leader who relentlessly pursues hero Mel Gibson, before meeting a spectacular death at the film's finale. Hollywood beckoned for Wells, and he spoofed his mad biker role in the popular teen comedy Weird Science (1985), before taking on another villainous role as the treacherous ex-soldier "Bennett", who foolishly double crosses Arnold Schwarzenegger in Commando (1985). Once more, Wells meets a dramatic end, as he is impaled against a boiler at the film's conclusion, as big Arnold remarks "Let off some steam, Bennett".Wells continued to find regular work as a "villain" of one description or another, predominantly in B-grade thrillers or action films including Last Man Standing (1987), Circuitry Man (1990), Kick of Death (1997) and Starforce (2000). The talented Wells then landed a recurring role as futuristic criminal "Ransik" in the highly popular "Power Rangers" TV series, and subsequent series of films including _Power Rangers Time Force: Photo Finish (2001)_, _Power Rangers Time Force: The End of Time (2002)_ and _Power Rangers Time Force: Dawn of Destiny (2002)_.

No Name and Dynamite Davenport

Tales from the Other Side