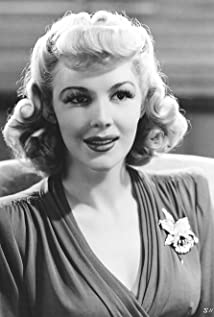 Born in Boston, Veda Ann Borg was a New York model in 1936 when a screen test brought her a short-lived contract at Paramount, where she made her debut film, Three Cheers for Love (1936). She fit better at Warner Brothers, where she played at least 15 roles (some of them bits) in 1937-38; but in 1939 a severe auto crash, requiring full facial reconstruction by plastic surgery, interrupted her career. Still attractive, she freelanced through the 1940s, often at "poverty row" studios like Monogram. In many of her films (both before and after the accident) she played a brassy, man-hungry, lower-class sexpot. Despite considerable talent, she received leading roles only in a few B films like What a Blonde (1945). Veda could make the smallest bit part memorable, though, with one line or a bit of business. Who could forget the sassy once-over she gives Wayne Morris in Kid Galahad (1937) or her "modderen singer of modderen songs" in The Bachelor and the Bobby-Soxer (1947). Her later roles were more varied, from a zombie to Blind Nell (a memorable last role) in The Alamo (1960). Veda's second marriage (1946-1958), to director Andrew V. McLaglen, produced three children: Mary McLaglen, Josh McLaglen, and Andrew Victor McLaglen II. She died of cancer in Hollywood at age 58 after at least 100 film roles.

Thunder in the Sun

The Wings of Eagles

Love Me or Leave Me

You're Never Too Young