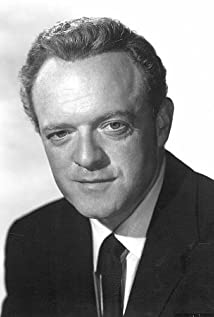 Craggy-faced, dependable star character actor Van Heflin never quite made the Hollywood "A" list, but made up for what he lacked in appearance with hard work, charisma and solid acting performances. He was born Emmett Evan Heflin in Oklahoma in December 1908, the son of Fanny Bleecker (Shippey) and Emmett Evan Heflin, a dental surgeon. When his parents separated his brother and sister stayed with his mother, while he was farmed out to his grandmother in California. He was never quite settled and his restless spirit led him to ship out on a tramp steamer after graduating from school. After a year at sea he studied for a law degree at the University of Oklahoma, but after two years he decided he had enough and went back to sailing the Pacific. When he returned he decided to try his hand at acting and enrolled at the prestigious Yale School of Drama. His first foray into theatre was the comedy "Mister Moneypenny" (1928) (credited as "Evan Heflin"). It was indifferently received and Van went back to sea, this time for three years. In 1934 he returned to the stage in the plays "The Bride of Torozko" and "The Night Remembers", both outright disasters.His big break came in 1936, when he landed a good leading role as a radical leftist at odds with the established elite in the S.N. Behrman comedy of manners, "End of Summer" at the Guild Theatre. Critic Brooks Atkinson, praising the play and the actors, commended the "sparkling dialogue" and "fluent and sunny performance" (New York Times, February 18 1936). Katharine Hepburn, who saw him on stage, then persuaded Van to take a swing at film acting and finagled a role for him alongside her in the Pandro S. Berman production A Woman Rebels (1936). Van spent a year at RKO in forgettable films, with roles ranging from a reverend in The Outcasts of Poker Flat (1937) to a top-billed part as a burnt-out quarterback in Saturday's Heroes (1937). By 1939 Van was back on stage, rather more successfully, in "The Philadelphia Story" at the Shubert Theatre. The hit play, which also starred Vera Allen, Shirley Booth and Joseph Cotten, ran for 417 performances, closing in March 1940. That same year he appeared for Warner Brothers in the entertaining but historically inaccurate western Santa Fe Trail (1940), Bosley Crowther describing his performance, above other cast members, as containing "the sharpest punch" (New York Times, December 21 1940).On the strength of these performances, Van was signed to a contract at MGM, where he remained for eight years (1941-49). His tenure was interrupted only by two years of wartime service as a combat photographer with the U.S. 9th Air Force, First Motion Picture Unit, which produced training and morale-boosting short films. Back at MGM, his third assignment at the studio, Johnny Eager (1941), had proved an excellent showcase for his acting skills. He played Jeff Hartnett, right-hand man of the titular crime figure (Robert Taylor), a complex, sardonic character, at once loyal soldier yet abjectly self-loathing. For his role as the heavy-drinking, Shakespeare-quoting mobster with a conscience, Van got the Academy Award as Best Supporting Actor in 1942. He was immediately cast in the leading role as a forensically-minded detective in Kid Glove Killer (1942), a film which marked the debut of Fred Zinnemann as a feature director. This was in turn followed by another B-movie whodunit, Grand Central Murder (1942).The prestigious--but not always accurate--historical drama Tennessee Johnson (1942) saw Van playing Andrew Johnson, the 17th US president. While the film was a critical success, it did less well at the box office. The New York Times commented on the "sincerity and strength" of his performance, adding "Mr. Heflin, in a full-bodied, carefully delineated portrait of a passionate man, gives decisive proof that his talents have thus far been haphazardly used" (January 13, 1943). In between wartime service and two musicals, Presenting Lily Mars (1943) and the Jerome Kern biopic Till the Clouds Roll By (1946), Van appeared in the excellent film noir The Strange Love of Martha Ivers (1946) with Barbara Stanwyck (as the inevitable femme fatale) and Kirk Douglas (as an alcoholic district attorney). As the sympathetic gambler Sam who returns to his home town, ostensibly to expose the dirty secrets of the main protagonists, Van had more on-screen time than his illustrious co-stars and some good lines to boot. Van put his tough-guy screen persona to good use in enacting Raymond Chandler's wisecracking gumshoe Philip Marlowe on NBC radio from June 1947, with 19 real-life Los Angeles detectives among the live audience.During the next few years the versatile Heflin dealt capably with a wide variety of assignments. He appeared as a jilted lover in the expensively-produced costume drama Green Dolphin Street (1947); he was Athos, one of The Three Musketeers (1948) and an ex-GI on the trail of a psychopathic prison camp informer in Fred Zinnemann's Act of Violence

They Came to Cordura