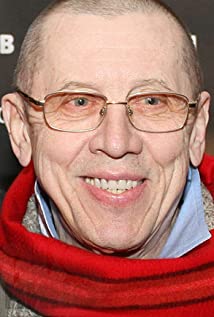 Valeri Zolotukhin, one of Russian cinema's most popular faces, who was disabled in his childhood and had to walk with crutches, is now a renown actor, singer, and writer.He was born Valeri Sergeevich Zolotukhin on June 21, 1941, in Bystry Istok village, Altai region, Russia. His father was chairman of a local collective farm; a powerful man in that remote Siberian region. His mother was a homemaker. At the age of 7 Zolotukhin fell out of window and suffered a severe trauma. He had to wear a cast and used crutches for several years, but he was dreaming of becoming an actor, because he was inspired by touring drama troupe. Upon his graduation from the village school, Zolotukhin went straight to Moscow. In spite of being lame he was admitted to the Department of Musical Comedy at the Moscow Theatre Institute (GITIS). While being a student he made his name as a singer of popular folk songs. His songs, peppered with risqué vernacular lyrics and funny jokes, soon made him one of the most popular singers in Russia. Zolotukhin married his girlfriend from the acting class, Nina Shatskaya, on the Valentine's Day, February 14, 1963. That same year he graduated from the Department of Musical Comedy of the Moscow Theatre Institute (GITIS).Zolotukhin was hired by Yuriy Lyubimov almost simultaneously with the famous singer-songwriter Vladimir Vysotskiy and the two actors became best friends. From 1964 Zolotukhin has been a permanent member of the legendary troupe at the Taganka Theatre, working mostly with the famous director Yuriy Lyubimov. His stage works include leading roles in such plays as 'Medeya', 'Marat i Markiz de Sad', 'Dobry chelovek is Sezuana', 'Tsena', 'Teatrlny roman', 'Faust', 'Pavel Pervy', 'Vladimir Vysotsky'. Zolotukhin shines on stage and in film as an actor of multifaceted talent and great versatility. He is particularly proud of his works in 'Sharashka', written by Aleksandr Solzhenitsyn, and in 'Zhivago', based on the novel by Boris Pasternak.Valeri Zolotukhin was once asked by the Taganka director Yuriy Lyubimov to play the role of Hamlet instead of Vladimir Vysotskiy, who was very busy with concert tours and traveling abroad. Zolotukhin had several rehearsals as Hamlet, and he was confronted by Vysotsky, "Valery, if you ever play Hamlet, I'll leave this theatre on the day of your premiere. I'll leave and go to the worst theatre." Hamlet was a dream role for any actor. Finally Vysotsky won. Zolotukhin generously stepped aside and never played Hamlet. Later Vysotsky summarized: "Zolotukhin is aware that he is the best. That's why he is never jealous."He shot to fame after starring in popular films 'Khozyain taygi' (1968) and 'Interventsiya' (1969), where his film partner was Vladimir Vysotskiy. Zolotukhin was best known for the leading role in 'Bumbarash' (TV 1971). His latest film works are the role of father-vampire in 'Nochnoi Dozor' (The Night Watch, 2004) and its sequel 'Dnevnoi Dozor' (The Day Watch, 2006). He also played a small, but beautifully performed role as Bosoy in the popular TV-series _Master i Margarita (2005)_ based on the eponymous novel by Mikhail A. Bulgakov and directed by Vladimir Bortko. Zolotukhin created his character in a masterful interplay with a stellar ensemble of actors; such as Oleg Basilashvili, Aleksandr Abdulov, Kirill Lavrov, Anna Kovalchuk, Aleksandr Galibin, Sergey Bezrukov, Aleksandr Filippenko, Valentin Gaft, Vladislav Galkin, Aleksandr Bashirov, and other Russian film stars.Zolotukhin recently published a two-volume edition of his memoirs. He presented many revelations and unusually candid observations in his well-written memoirs; sincere, sharp, generous and insightful comments about his career and about some of his stage and film partners. This included such stars as Vladimir Vysotskiy, Venyamin Smekhov, Leonid Filatov, Anatoli Efros, Yuriy Lyubimov, and many other Russian celebrities. He was the closest friend of the famous singer-songwriter Vladimir Vysotskiy, who was arguably the biggest star in the 60's and 70's Russia. Zolotukhin was asked to say the last word when Russia buried Vysotsky.In 2011, after resignation of Lyubimov, Valery Zolotukhin was appointed artistic director of the Taganka company. He was designated People's Actor of Russia in 1987 and received numerous awards for his film and theatre performances. In the course of his acting career he appeared in more than 40 feature films, 20 TV works, and played over 60 roles on stage. Valeri Zolotukhin is a proud father of three sons. He is living and working in Moscow, Russia.