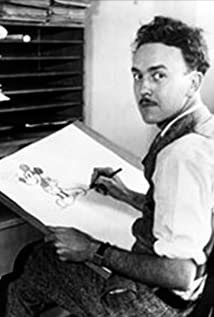 Ub Iwerks worked as a commercial artist in Kansas City in 1919 when he met Walt Disney who was in the same profession. When Disney decided to form an animation company, Ub Iwerks was the first employee he had due to his skill at fast drawing as well as being a personal friend.When Charles Mintz raided Disney's animation studio and stole the rights to their character Oswald the Rabbit, Ub was the only associate to remain with Disney. He served as the principle animator for the first Mickey Mouse shorts and Silly Symphonies. Iwerks was so prominent in the production of these shorts that it was speculated that Ub was the dominant force behind the success of Disney Productions. The combination of Iwerks' rising ambitions, occasional differences with Walt and a tempting deal with Pat Powers to finance his own studio prompted him to break away in 1930. His studio was never a tenth of the artistic or financial success that Disney was. He simply did not have the creative talents of his partner and his characters, Flip the Frog and Willy Whopper were rather dull failures. His studio was closed in 1936 when Powers withdrew his support. He worked for Columbia starting in 1938 and worked for two years until he decided to return to Disney. The two men never commented on their renewed relationship but the reunion was mutually beneficial. Iwerks was able to abandon animation and concentrate on technical development which helped create many of the special effects that the Disney company excelled in for decades, especially concerning the live action animation combination sequences in Song of the South (1946) and Mary Poppins (1964).