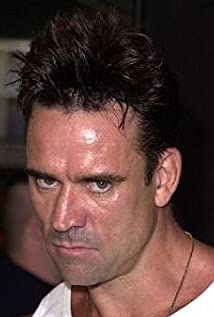 Trevor Goddard was born in Croydon, Surrey, England on October 14, 1962. His parents, Eric and Clara, and baby Trevor moved to Bromley, Kent, where he grew up. As a natural athlete, Trevor was highly interested in sports. As a youngster, he played football (soccer) and cricket and enjoyed running as well as many other recreational activities. But his greatest passion was boxing. He was a light heavyweight with a 58-1-1 record out of a total of 60 fights. He had also been invited to fight in the U.S.And come to America he did, in 1986, with a couple of his friends. Trevor and his mates enjoyed a great deal during their stay in New York. Trevor even bought a car. After three weeks of entertainment and relaxation, Trevor phoned his father and, with a heavy heart, told him "I'm going to try to make it here, Dad. I like it very much. I'm in love with the country, I like the people." His friends returned home, and Trevor remained in the U.S.In the early '90s, he began a career as an actor. Trevor worked regularly on TV. He made guest appearances on such TV series as "Baywatch" (1989) and "Silk Stalkings" (1991). Eventually he landed a leading role as the villainous, psychotic, yet charismatic, "Keefer" in Men of War (1994), opposite action star Dolph Lundgren, as well as Kevin Tighe, Catherine Bell, Tom Wright and BD Wong. From that moment on, Trevor was usually typecast as crazy, offbeat villains. That was borne out again in the popular video-game-based motion picture Mortal Kombat (1995), in which Trevor played a criminal called "Kano". With his rugged looks, muscular physique and gruff voice, he made this "Kano" internationally famous, even providing him with an Australian accent. Although he was English-born, Trevor had quite an ability to disguise his accent as Australian, which he continued to do in voice acting roles for subsequent video games.Trevor played supporting roles in such movies (usually action films) as Illegal in Blue (1995) (V), Yesterday's Target (1996) (TV), Fast Money (1996), Prey of the Jaguar (1996) (V), and Assault on Devil's Island (1997) (TV) in which he costarred with Hulk Hogan, Carl Weathers, Billy Drago and Martin Kove. He appeared in a few dramatic comedies such as She's Too Tall (1999) as a crazy-in-love parking lot attendant and in Some Girl (1998) as "Ravi". He appeared in an uncredited role in Gone in Sixty Seconds (2000), opposite such famous names as Nicolas Cage, Angelina Jolie, Robert Duvall, Vinnie Jones, Timothy Olyphant and Delroy Lindo, and also in When Billie Beat Bobby (2001) (TV).Once again, Trevor achieved international fame with the popular TV series "JAG" (1995), where he appeared from 1998 to 2001 as "Lt. Cmdr. Mic Brumby". This show made Trevor a well-known personality to the world audience and greatly increased his fan base.Trevor played his first and only leading role in Hollywood Vampyr (2002) as a gothic vampire called "Blood". His last film was the blockbuster Pirates of the Caribbean: The Curse of the Black Pearl (2003), where he utters the line "Say good-bye" to Orlando Bloom's character. Alas, "Grapple" (Goddard) was dispensed of pretty rapidly in the film.Prior to his death, Trevor was considered to replace Pierce Brosnan as James Bond in Casino Royale (2006).On June 7, 2003, Goddard was found dead in his home in North Hollywood, Los Angeles, California. He was 40 years old. Initial reports indicated that Goddard was in the process of getting a divorce and that suicide was suspected. An autopsy later showed that Goddard died from a drug overdose of heroin, cocaine, temazepam and vicodin. However, his death was ruled accidental.

Pirates of the Caribbean: The Curse of the Black Pearl

Prey of the Jaguar