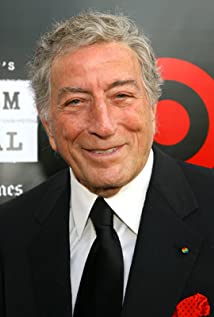 Tony Bennett, one of the legends of jazz and popular music who served during the Second World War and then developed a career spanning over half a century, is now giving another concert tour across the United States and Europe.He was born Anthony (Antonio) Dominick Benedetto on August 3, 1926, in Astoria, Queens, in New York City. His father was a grocer, his mother was a seamstress, and his uncle was a tap dancer. Young Tony gave a singing performance at the opening of the Triborough Bridge at the age of 10. He studied music and painting at the New York High School of Industrial Arts but dropped out at the age of 16. He had to support his family and he performed as a singing waiter in Italian restaurants.During the Second World War Tony Bennett was drafted into the US Army. He served on the front lines until April 1945 and was involved in the liberation of a Nazi concentration camp at Landsberg, Germany. After the WWII he sang with the Army military band under the stage name "Joe Bari" until his discharge and return to the US in 1946. He studied the Bel Canto singing discipline at the American Theater Wing on the GI Bill and continued singing while waiting on tables at New York restaurants.At the beginning of his career he drew from such influences as Judy Garland, Louis Armstrong, and Bing Crosby among others and eventually created his own style of singing. He also integrated jazz-style phrasing into his singing by imitating the instrumental solos with his own voice.In 1949, Bennett was invited on a concert tour by Bob Hope, who suggested him to use the name Tony Bennett. In 1950, he was signed to Columbia Records and made his first big hit 'Because of You', produced by Mitch Miller with orchestration by Percy Faith. It sold over a million copies, reaching #1 in 1951 pop charts. His other #1 hits were 'Blue Velvet', 'Rags to Riches', and "Stranger in Paradise" in 1952-54. Bennett was able to do five to seven shows a day in New York to crowds of screaming teenagers.In 1956, he hosted The Tony Bennett Show (1956), which replaced Perry Como's Kraft Music Hall (1948). He continued making recordings with the top jazz musicians of the day and his collaboration with Count Basie brought two albums, with 'Chicago' and 'Jeepers Creepers' becoming popular songs. His landmark concert at the Carnegie Hall in June of 1962 featured 44 songs and was accompanied by an all-star band. The same year he released 'I Left My Heart in San Francisco', which remained on the charts for a year and has become his signature song. The eponymous album became a gold record.Bennett had a change of fortune after 1964, with strong competition from The Beatles and the British Invasion. In 1965, he separated from his first wife, artist Patricia Beech, with whom he had two sons. The marriage did not work under the pressures of being too much on the road and eventually ended in divorce. At the same time, his first acting role in the film The Oscar (1966) was not a success; he received poor reviews, and the film was lambasted by critics, ignored by audiences and became one of the biggest flops of the year. His singing career took a downturn when his bosses at Columbia Records, worried about competition from The Beatles, forced him to change his image and style, which pleased no one. He left Columbia in 1972. A brief contract with MGM Records yielded no hits, and Bennett was left without a recording job.He married again. He started his own record company and made two highly praised albums with Bill Evans. He moved to England for a while, where he once performed for the Queen. Back in the US, Bennett found only one regular gig in Las Vegas, but no recording deals or concert tours. His debts grew to the point of bankruptcy, and the IRS was trying to seize his house in L.A. By the late 1970s, his second marriage to actress Sandra Grant, with whom he had two daughters, was failing. He also suffered from a drug addiction, and after an overdose in 1979, he called for help from his son Danny Bennett. Danny signed on as his father's manager, and it turned out to be a smart move.Tony Bennett rejuvenated his career by bringing back his original style, tuxedo and the Great American Songbook. He staged a strong comeback during the 1980s and 1990s, signed with Columbia again, and made two gold albums in 1992 and 1993, and developed a surprising and loyal following among audiences in their 20s and 30s. He also received a Grammy Award, the first since 1962. He again performed and recorded with Frank Sinatra, and extended musical collaboration to gigs with the Red Hot Chili Peppers, Elvis Costello, and k.d. lang among others. Bennet also appeared as himself on MTV's documentary series Unplugged (1989) in 1994 and 2000.His resilience and successful comeback became a sensation in the modern day entertainment industry. Bennett appeared as himself in the films Analyze This (1999), The Scout (1994), and Bruce Almighty (2003). He has sold over 50 million records world

America: The Story of Us