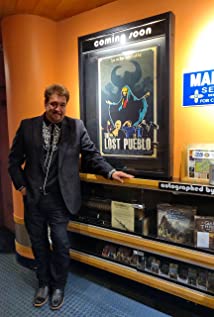 Tomas Sanchez, aka, Thomas R Sanchez, was born Albuquerque , NM 1969 at St.Joesphs hospital to Trinidad and Esther Sanchez. The 5th of 6 boys, he went to grade school in Amarillo, TX. Graduated in 1987 from Eldorado High lettering in Baseball, Basketball and Football. Instead of going to play baseball in College he sign a modeling contract and began cutting his chops in the Chicago market. Working as a print and runway model ( clients: Cricket wireless, Gadzooks, Jeans West, Hugo Boss, Carlos P, Brooks bros.)Tomas has appeared in national commercials for, McDonalds, RCA, Rocky Mountain. His family is from northern New Mexico. With strong beliefs in faith, culture and hard work, he founded Conservation Xtreme in 2007 which works with Wounded Warrior projects, PVA and young wildlife and water education to save the wildlife and history in northern New Mexico. Favorite saying, "Anything is possible when you add God and family together!" Trained by the actor's studio with Lawrence Park in NM. Advanced training in driving, hitting the ground and special effects. Produced and directed the shorts "a Grains of paradise " Local shows ODSW and Nuevowood. With his son Gabriel Sanchez at his side he wrote, directed and produced the award winning movie 'The Lost Pueblo" 2016 release. With his wife Isabel and he is a partner in Sanchez Media LLC & Saint Hood Productions.