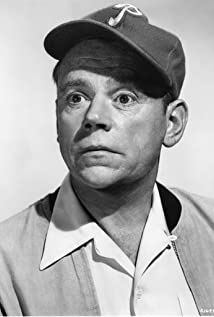 Beleaguered character actor Tom Ewell, the unlikely film and TV star with the trademark lumpy figure and droopy, lugubrious mug, was born Samuel Yewell Tompkins on April 29, 1909, in Kentucky. His family tried to steer him towards a law career but he chose the path of acting instead after becoming involved in college productions at the University of Wisconsin.Ewell began his career at the age of 19 in summer stock roles, marking his professional stage debut in the play "The Spider" in 1928, before making an emphatic move to New York three years later. A former salesman at Macy's, he found an "in" with the famed Actors Studio (later appearing in a number of their "Actor's Studio" TV episodes in the late 1940s) before taking his first Broadway curtain call in the drama "They Shall Not Die" in 1934. For the rest of the decade he demonstrated his versatility in both comedies and dramas with roles in such New York plays as "The First Legion," "Geraniums in My Window," "Let Freedom Ring," "Ethan Frome," "Tobacco Road," "Stage Door," "Brother Rat," "The Merchant of Yonkers" and "Family Portrait".Ewell made an inauspicious film debut with an unbilled bit in the comedy They Knew What They Wanted (1940) and continued that same year just as bleakly in the westerns Back in the Saddle (1941), Desert Bandit (1941) and The Kid from Kansas (1941). Better suited for Broadway, he found more challenging roles back East in "Suzanna and the Elders" (1940), "Liberty Jones" (1941) and "Sunny River" before his career was suddenly interrupted by World War II service.A return to The Great White Way happened almost immediately upon his discharge and Tom scored with the comedy hits "Apple of His Eye" (1946) and "John Loves Mary," the latter earning him the Clarence Derwent Award. He also co-starred in the musical revue "Small Wonder" in 1948. Hollywood seemed to pay more attention this time around what with his growing theater reputation and he was handed a terrific role (after appearing in a couple of Paramount "Pacemaker" short comedies) in the Spencer Tracy/Katharine Hepburn classic battle-of-the-sexes film comedy Adam's Rib (1949). Playing Judy Holliday's faithless husband in a part that would later mirror a number of his aging, roving-eye philanderer (minus the buckshot, of course, courtesy of Judy!), Tom's film career finally kicked into high gear.A succession of wisecracking character supports came his way but the first two were played against his comedy typecast. He was third-billed behind Lana Turner and Ray Milland in the elegant romantic meller A Life of Her Own (1950) as Turner's suave modeling agent and played a fellow reporter along with Tyrone Power in the WWII drama American Guerrilla in the Philippines (1950). Back in the comedy fold, he appeared in the Bing Crosby musical film Mr. Music (1950) before sharing co-star billing with David Wayne in the Willie and Joe war comedy Up Front (1951). He finally received top billing in the comedy Finders Keepers (1951) and again in Back at the Front (1952) when he reprised his Willie character alongside Harvey Lembeck, who replaced a departing David Wayne as Joe.By far Tom's most successful part began on Broadway in 1952 with "The Seven Year Itch" opposite a delectable Vanessa Brown as "The Girl Upstairs". The show ran for nearly three years and Ewell played the daydreaming adulterer wannabe Richard Sherman part more than 900 times, ultimately winning the Tony Award for his comedic tour de force. Fortunately, he was allowed to recreate the wayward husband role when The Seven Year Itch (1955) transferred to film co-starring Hollywood's hottest property at the time, Marilyn Monroe. Although an Oscar nomination eluded him for this performance, he won a Golden Globe Award and character movie stardom was assured...at least for a time.The pudding-faced actor tried to patent his leering "ordinary man" with other female knockouts -- The Girl Can't Help It (1956) opposite blonde bombshell Jayne Mansfield, The Great American Pastime (1956) with fetching Anne Francis and The Lieutenant Wore Skirts (1956) co-starring sexy Sheree North, but the vehicles were mild in comparison. The horse-racing yarn A Nice Little Bank That Should Be Robbed (1958) co-starring Mickey Rooney wrapped up Tom's starring career in films.The middle-aged actor turned more and more of his attention to stage and television at this juncture. He enjoyed great applause once again for the Broadway comedies "The Tunnel of Love" and "A Thurber Carnival" and went on to star in his own sitcom, The Tom Ewell Show (1960), portraying a real estate agent whose domestic life is complicated by all the women in his life (wife, three daughters, mother-in-law). It lasted one complete season. He subsequently appeared in standard guest appearances on TV over the years, plus a few films here and there. The 60-year-old actor rejuvenated on TV with the success of the Robert Blake series Baretta (1975). Tom retired in the mid-1980s after fin

Best of the West

To Find a Man