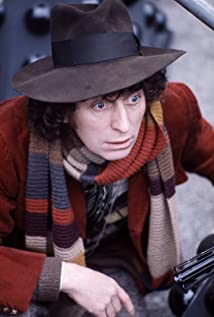 One of Britain's most recognizable (and most larger-than-life) character actors, Tom Baker is best known for his record-setting seven-year stint as the Fourth Doctor in Doctor Who (1963). He was born in 1934 in Liverpool, to Mary Jane (Fleming) and John Stewart Baker. His father was of English and Scottish descent, while his mother's family was originally from Ireland. Tom, along with his younger sister, Lulu, and younger brother, John, was raised in a poor Catholic community by his mother, a house-cleaner and barmaid, who was a devout Catholic, and his father, a sailor, who was rarely at home.At age fifteen, Baker left school to become a monk with the Brothers of Ploermel on the island of Jersey. Six years later, he abandoned the monastic life and performed his National Service in the Royal Army Medical Corps., where he became interested in acting. Baker then served on the Queen Mary for seven months as a sailor in the Merchant Navy before attending Rose Bruford College of Speech and Drama in Kent, England, on scholarship.Baker acted in repertory theaters around Britain until the late 1960s when he joined up with the National Theatre, where he performed with such respected actors as Maggie Smith, Anthony Hopkins and Laurence Olivier, who helped him get his first prominent film role as Rasputin in Nicholas and Alexandra (1971). His performance in this film earned him two Golden Globe Award nominations, one for best actor in a supporting role and another for best new star of the year. A couple of years earlier, Baker had made his theatrical film debut in The Winter's Tale (1967).Despite appearances in a spate of films, including The Canterbury Tales (1972), The Vault of Horror (1973), The Golden Voyage of Sinbad (1973) and The Freakmaker (1974), Baker found himself in a career lull and working as a labourer at a building site. However, the BBC's Head of Serials, William Slater, who had directed Baker in BBC Play of the Month (1965), recommended him to producer Barry Letts, who was looking for a replacement for Jon Pertwee as the Fourth Doctor in Doctor Who (1963). Baker's performance in The Golden Voyage of Sinbad (1973) convinced Letts that he was right for it. It brought Baker international fame and popularity. He played the role for seven years, longer than any actor before or since.After leaving Doctor Who (1963) in 1981, Baker returned to theatre and made occasional television and film appearances, playing Sherlock Holmes in The Hound of the Baskervilles (1982), Puddleglum in The Chronicles of Narnia story The Silver Chair (1990) and Hallvarth, Clan Leader of the Hunter Elves, in Dungeons & Dragons (2000).

The Wind in the Willows

Monarch of the Glen