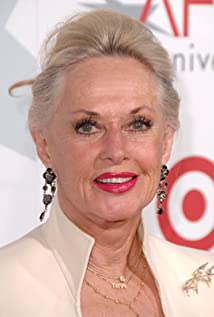 From working for the exacting Alfred Hitchcock to a film written by Edward D. Wood Jr., Tippi Hedren, the Minnesota blonde, has had a distinctive career. She was born Nathalie Kay Hedren in New Ulm, MN, to Dorothea (née Eckhardt) and Bernard Hedren, who ran a general store, and is of Swedish, Norwegian, and German descent. Tippi was working as a New York fashion model when she married her first husband, former actor and later advertising executive Peter Griffith, in 1952 (married until 1961). She gave birth to her only child, future star Melanie Griffith, on August 9, 1957. Alfred Hitchcock discovered Tippi, the pretty cover girl, while viewing a commercial on NBC's Today (1952) show. He put her under personal contract and cast her in The Birds (1963). In a cover article about the movie in Look magazine (Dec. 4, 1962), Hitchcock praised her; he also told the Associated Press: "Tippi Hedren is really remarkable. She's already reaching the lows and highs of terror". Her performance in the film earned her both the Golden Globe award and the Photoplay award as Most Promising Newcomer. Her next film was playing the title role in Hitchcock's Marnie (1964), where she played a challenging and difficult role of a frigid, habitual thief. The film wasn't as big a hit as "The Birds," and it would take years before she won well-deserved admiration for her work. The professional relationship with Hitchcock ended with mutual bitterness and disappointment during the filming of "Marnie." That year, she married her agent, Noel Marshall (married until 1982). Charles Chaplin cast her in a supporting role in his final film A Countess from Hong Kong (1967), which flopped. Thereafter, Tippi and her husband Marshall collected big cats and other wildlife for the film Roar (1981), which they starred in and produced. The film took 11 years and $17 million to make, but it only made $2 million worldwide. Nevertheless, the film was a turning point in her life; she became actively involved in animal rights, as well as a wide variety of humanitarian and environmental causes. She married her third husband, businessman Luis Barrenecha, in 1985 but divorced him seven years later. In 2002, she became engaged to veterinarian Martin Dinnes, but after six years and no wedding, the couple called it quits. Tippi has devoted much time and effort to charitable causes: she is a volunteer International Relief Coordinator for "Food for the Hungry". She has traveled worldwide to set up relief programs following earthquakes, hurricanes, famine and war, and has received numerous awards for her efforts, including the Humanitarian Award presented to her by the Baha'i Faith. As for animal causes, she is founder and president of The Roar Foundation. Onscreen, she continues to work frequently in films, theater and TV. She appeared in I Woke Up Early the Day I Died (1998), finally bringing to the big screen the last screenplay written by the late Edward D. Wood Jr. in 1974 (and featuring Wood regulars Maila Nurmi and Conrad Brooks, just about the only surviving members of Wood's stock company). She also enjoyed playing comedic roles, such as an abortion rights activist in Alexander Payne's satire Citizen Ruth (1996) and slapping Jude Law in I Heart Huckabees (2004). Tippi's contributions to world cinema have been honored with Life Achievement awards in France at The Beauvais Film Festival Cinemalia 1994; in Spain, by The Fundacion Municipal De Cine in 1995; and at the Riverside International Film Festival in 2007. In 1999, Tippi was honored as "Woman of Vision" by Women in Film and Video in Washington, D.C., and received the Presidential Medal for her work in film from Hofstra University. She enjoys spending time with her daughter and grandchildren: Alexander Bauer, Dakota Johnson and Stella Banderas.