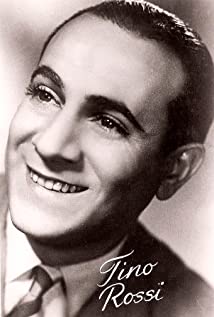 Tino Rossi broke into films in 1934 with Moscow Nights (1934) but his first real success came with Marinella (1936). All his films were musicals and capitalised on his success as a singer. It is during the Occupation of France by the Germans that his film career reached its peak, notably with Mon amour est près de toi (1943) and Het eiland der liefde (1944). At the Liberation, the French authorities reproached him for associating with the French Gestapo, but most importantly for actively supporting collaborationist causes such as the LVF (Légion des Volontaires Français) who sent French volunteers to work in German factories. He was arrested in October 1944 and spent three weeks in Fresnes prison (near Paris). Brought to trial in 1945, his sentence was relatively light (unlike his fellow actors Arletty,Mireille Balin, Josseline Gaël or Robert Le Vigan) as he only received a retrospective (and symbolic) work suspension. He then only appeared sporadically in films concentrating on his singing career.

Song of the Clouds