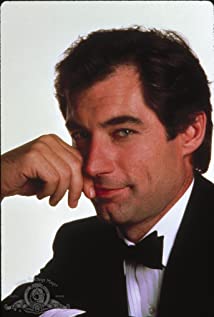 At a consistently lean 6' 2", green-eyed Timothy Dalton may very well be one of the last of the dying breed of swashbuckling, classically trained Shakespearean actors who have forged simultaneous successful careers in theater, television and film. He has been comparison-shopped roundly for stepping into roles played by other actors, first following Sir Laurence Olivier in Wuthering Heights (1970), in Scarlett (1994).Undaunted and good-natured, he has always stated that he likes the risk of challenges. He was born in Colwyn Bay, North Wales, the oldest of five children of Dorothy (Scholes) and Peter Dalton-Leggett. His father was stationed in Colwyn Bay during World War II, and moved the family to Manchester in the late 1940s, where he worked in advertising and raised the growing Dalton family, in an upper-class neighbourhood outside of Belper, Derbyshire. Timothy was enrolled in a school for bright children, where he excelled in sports and was interested in the sciences. He was fascinated with acting from a young age, perhaps due to the fact that both his grandfathers were vaudevillians, but it was when he saw a performance of "Macbeth" at age 16 that his destiny was clinched.After leaving Herbert Strutt Grammar School at age 16, he toured as a leading member of Michael Croft's National Youth Theater. Between 1964-66, he studied at the Royal Academy of Dramatic Art (RADA). Just before completing his two years, he quit and joined the Birmingham Repertory Theatre, playing the lead in many productions under the direction of Peter Dews while at the same time then as James Bond in The Living Daylights (1987) and Licence to Kill (1989), and even more brutally, recently, as Rhett Butler turning professional. Dalton later said of RADA in an interview with "Seventeen" magazine (December 1970), "It took a year to undo the psychological damage that was caused by the oppressive teachers.".His talent and classic good looks immediately landed him professional work in television, guest-starring on an episode of the short-lived series, Judge Dee (1969), and as a regular on the 14-episode series Sat'day While Sunday (1967) with the young Malcolm McDowell. In late 1967, Peter O'Toole recommended him for the role of the young King Philip of France in The Lion in Winter (1968) (coincidentally, this was also Anthony Hopkins' big break). The following year, he starred in the Italian film The Voyeur (1970) with Marcello Mastroianni and Virna Lisi, although his voice was dubbed into Italian by another actor. Dalton also mixed in a healthy dose of BBC work during this time, including The Three Princes (1968), BBC Play of the Month: Five Finger Exercise (1970) and Candida (1973). Also during this time, he was approached and tested for the role of James Bond in On Her Majesty's Secret Service (1969) which he turned down, feeling he was too young for the role. His next film was another costume drama, Cromwell (1970), working with director Ken Hughes, with whom he later made his first American film, Sextette (1977). He followed Cromwell (1970) with Wuthering Heights (1970) and Mary, Queen of Scots (1971).He was already developing a pattern in his films that would follow him throughout his career: costume dramas where he played royalty, which he had done in three of his first four films (and ridden horses in three, and raised a sword in two). In 1972, he was contracted to play a role in Lady Caroline Lamb (1972). However, he was replaced at the last moment. Dalton sued the company and won, but the film went on without him. From the early to mid-1970s, he decided to further hone his skills by going back into the theater full time. He signed on with the Royal Shakespeare Company (RSC) and the Prospect Theatre Company (PTC), and toured the world with both, playing the leads in "Romeo and Juliet", "King Lear", "Henry V", "Love's Labours Lost" and "Henry IV" - parts 1 and 2.In 1975, he returned to movies in the British/Austrian production of The Executioner (1975). It was followed in 1976 by the Spanish religious historical film about the inquisition, The Man Who Knew Love (1976), which was never widely released. After this, he took another break from film, mixing in a healthy dose of theater, returning for his first American film, Sextette (1977), and the lengthy miniseries Centennial (1978), his first American television appearance, in which Lynn Redgrave played his wife. Because of his broad exposure to American audiences in this series, he began to get more frequent film and television work in the United States, including the Charlie's Angels (1976) episode "Fallen Angel" -- which, ironically, had several references to his character being like James Bond -- and the TV movie The Flame Is Love (1979). Although he did a few features, including playing Vanessa Redgrave's husband in Agatha (1979), most of his work until 1985 consisted of TV movies and miniseries. He played Prince Barin in the science fiction classic Flash Gordon (1980). He fo

Secret of the Wings