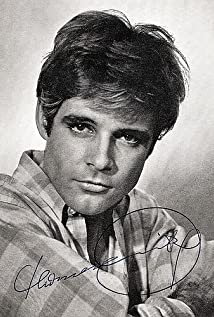 He was a dashing romantic heartthrob of the 1960s, the scion of illustrious show business parents. Thomas was born in Dresden, the son of pre-war Ufa Film matinee idol Willy Fritsch and the actress and dancer Dinah Grace. He studied drama, ballet and singing in Hamburg and made his theatrical debut in 1963 at the Stadttheater Heidelberg. Success in films soon followed. Opposite screen icons like Lilli Palmer (Adorable Julia (1962), And So to Bed (1963)), Daliah Lavi (Één bed voor twee (1962)) and Senta Berger (Full Hearts and Empty Pockets (1964)), Thomas became one of the most popular juvenile leads of the decade. As early as 1962, he won the prestigious Bambi Award as Best Young Actor. He gained further cinematic exposure through co-starring in European westerns (The Last Ride to Santa Cruz (1964), Legend of a Gunfighter (1964) ) and international co-productions (Uncle Tom's Cabin (1965) ). After he was conscripted to military service in 1966, his fortunes began to wane. By the time he was able to return to acting, public tastes had changed and his type of screen personae was no longer in demand. A projected career in Hollywood also ended in disappointment.Following several years in the wilderness, Thomas made a comeback on stage as the star of light satirical comedies. By the mid-70s, he had also reinvented himself as a TV character player, often alternating sympathetically roguish with comical roles. His popularity with audiences was ultimately re-established with recurring roles in shows like Drei sind einer zuviel (1977), Rivalen der Rennbahn (1989), and Our Charly (1995). Moreover, Thomas frequently popped up as assorted suspects in the ever popular crime series Derrick (1974) and The Old Fox (1977). He also enjoyed a lengthy tenure as the narrator of children's radio plays and animated films. As a voice-over actor, he became familiar to millions, dubbing (among many others) for major stars like Tim Curry, Jeremy Irons, William Hurt, Russell Crowe (as Maximus in Gladiator (2000)), Alan Rickman, Alec Baldwin, Jeff Bridges and Ian McShane.In private life, Thomas avidly supported animal welfare. He maintained residences on the island of Mykonos and in Munich where he died on April 21 2021 at the age of 77, having been diagnosed with dementia two years prior.

Jim Button and the Wild 13

Mara and the Firebringer

The Fruit Is Ripe

Three Men in the Snow