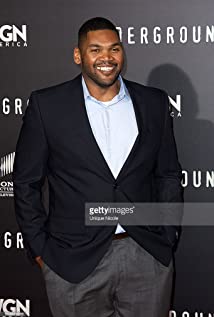 Theodus Crane has a giant presence and an even bigger personality. Taking the scenic route to his career in acting, Theodus was certain that he was either going to be an illustrator or run away to join the circus on his 18th birthday. Fortunately, he chose art school. Though visual art didn't work out, Theodus was set on a path to find his medium. From culinary art to massage therapy, nothing checked all the boxes. That is until Theodus was cast as 'Chiaphas' in a regional production of "Jesus Christ Superstar". He was auditioning to play the cello and left with a songbook! From then on there was no stopping, he sought out every opportunity he could find to perform and learn. From a flesh-eating butcher in a haunted house to a barker on Bourbon St., Theodus sought his stage. Theodus found his way into TV and Film with roles ranging from post-apocalyptic survivor, 'Big Tiny' on AMC's The Walking Dead to the forlorn 'Zeke' from Underground. Theodus is also a UCBNY alum and voice-over actor. Being a lifelong martial artist and competitor, Theodus developed a love for stunt work and has had the great pleasure to double Nonso Anosi in all 3 seasons of Zoo, as well as Stunt/Actor roles