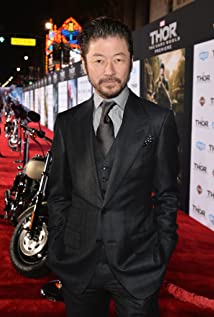 Tadanobu Asano's a Japanese film actor. His father suggested he take on what became his first role in the TV show Kimpachi Sensei at 16. His film debut was Swimming Upstream (1990) though his first major critical success was in Shunji Iwai's Fried Dragon Fish (1993). His first critical success in the West was in Hirokazu Koreeda's Maborosi (1995), in which he played a man who inexplicably throws himself in front of a train, widowing his wife & orphaning his infant son. His best known works internationally are the samurai films Taboo (1999) & The Blind Swordsman: Zatoichi (2003). It was on the set of Iwai's Picnic (1996) that he met & fell in love with J-Pop idol Chara. They married soon after learning she was pregnant with their first child, Sumire. While best known for characters who are psychologically offbeat, if not downright psychotic (e.g. Kakihara in Ichi the Killer (2001)), he has been described by those who know him as a down-to-earth family man. He has directed commercial TV spots for Chara. Hesistant to identify himself as an actor, he most readily describes himself as a vocalist, referring to Mach 1.67, the band he has w/ director Gakuryû Ishii. He's also an artist & sometimes works as a model, most notably for the Japanese designers Takeo Kikuchi & Jun Takahashi.