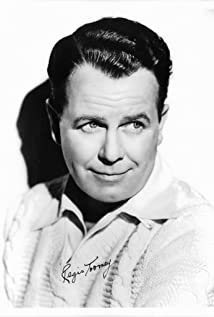 Pittsburgh-born and -raised character actor Regis Toomey, of Irish descent, took an early interest in the performing arts and initially studied drama at the university of his home town. One of four children of Francis X. and Mary Ellen Toomey, John Regis Toomey initially pondered a law career, but acting won out and he gradually established himself as a musical stage performer. Dropping his first name for acting purposes, he was touring in a production of "Little Nellie Kelly" in England when he developed an acute case of laryngitis. The severity of the problem forced a serious rethinking of his career goals.With the birth of sound pictures, Toomey made an auspicious debut with Alibi (1929) starring Chester Morris where a climactic death scene sparked controversy--and a movie career that would include almost 200 pictures and a number of other notorious death scenes. His lead/second lead status opposite such stars as Clara Bow, Constance Bennett, Barbara Stanwyck and Evelyn Brent fell away within a few years, and he found more work in streetwise character roles. Fast-paced crime action was his forte and he was prevalent throughout the 1930s and 1940s. He appeared in many classic films including 'G' Men (1935), Meet John Doe (1941), The Big Sleep (1946), Rachel and the Stranger (1948) and Spellbound (1945). In 1955 he played Uncle Arvide of The Salvation Army in Guys and Dolls (1955) alongside Marlon Brando, Frank Sinatra, Jean Simmons and Vivian Blaine, a role for which he is still well remembered.In the 1950s he found employment on TV as a good guy, typically playing judges, sheriffs, businessmen and police sergeants. He was a regular on The Mickey Rooney Show (1954). Fellow one-time singer Dick Powell became a friend and Powell, having turned producer, saw to it that Toomey had involving roles on a couple of his TV series such as Richard Diamond, Private Detective (1957) and Burke's Law (1963). He was later a regular on Petticoat Junction (1963). Toomey played roles well past his 80th year.His marriage (from 1925) to Kathryn Scott produced two children. They met in 1924 when he appeared in a musical production of "Rose Marie" that Kathryn assistant choreographed. Toomey died of natural causes on October 12, 1991, at the Motion Picture Country House in Woodland Hills, California at age 93.

The Out of Towners

The Night of the Grizzly