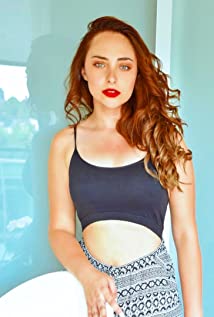 She is a Mexican-Spanish actress, singer, composer, psychologist, and host. Elisa was raised in a Spanish family, although she lived her first years of life on the sunny beaches of Miami Florida. At the age of 4, Elisa returned to Mexico City to pursue her dream of becoming an actress.Elisa is known for her leading role in the movie "Bad Habits" (2005) for which she received a Silver Goddess and an Ariel Award. She did this movie with just 8 years old. But although this is one of her most recognized works this was not her first project, the actress began her artistic career in the year 2000 with a small part in the soap opera (telenovela) "Live the Children" and in the television programs "Incognito" and "The Sesame Street". In 2004-2005 Elisa played Mia Colucci character in the successful worldwide soap opera "Rebelde".In 2007, Elisa Vicedo plays the character of Gloria in the soap opera Póstal. In 2008 she start participating in the Televisa program "The Rose of Guadalupe" where she has made more than 25 episodes. In 2009 Elisa played the two main characters of the soap opera "Wild Heart", playing the children's version of "Aimee and Regina", these same characters were also played in their adult version by Araceli Arambula. In 2011 she began participating in another Televisa production called "As The Saying Goes" where she has made more than 12 episodes.In 2012 the actress played the evil Isadora in the soap opera "Brave Love", her character was the same character that the actress Leticia Calderón played, the difference is that Elisa played this character in her adolescence stage and Calderón in her adult stage. In the same year, the actress had the authorization of the director of the CEA (Artistic Education Center of Televisa) Eugenio Cobo to be able to play a special role in the Telemundo series "The Brunette Virgin".In 2014 the actress was selected for the role of Aime in the soap opera "Until the end of the world". Elisa interpreted the cute and witty Aimé who was one of the best friends of the Ripoll family. Elisa had a secondary role in this soap opera although it was a very important character in it. In 2015, the actress joined the soap opera "Before dead that Lichita" with the character of Vanessa, who was better known as the fiancé of the Güero (a character played by Jesús Carús). The Güero was the platonic love of Magos (a character played by Sherlyn González) who had one of the main roles in the story. So Elisa was the antagonist of this love triangle and had a very important participation in the story.Between the end of 2015 and the beginning of 2016, the actress had small participation in the soap opera "A Road to Destination", where she played the grumpy and serious Roxana. In addition, the actress studied a "Psychology Degree" at the prestigious Anahuac University; the actress was graduated with honors from her degree in psychology. Similarly, the actress continued preparing herself and currently has two master degrees. One of them was taken at Anahuac University; this master degree is called "Family Sciences for Family Consultancy". And she has another master degree in "Integral Humanistic Psychotherapy", she took this master in Galene Institute which is located in Madrid, Spain.In addition to venturing into film and television, Elisa has been part of numerous plays such as: "The little mermaid" (playing the lead role), "The Fat, El Gordo" from Oscar Liera, "Don't mess it up", "The priest" and the successful play "Vámonos de Pinta". Vicedo is not only known as an actress, but she is also known as a singer and as a host. Elisa was the host for 2 years of the successful YouTube programs "Esto es Combo" and "La lata" where she worked with Alex Montiel (better known as the Golden Scorpion). That's how she started interviewing and making movie coverages. In these youtube programs Elisa's work was to interview actors and actresses from all around the world, some of the actors that Elisa could interview are: James McAvoy, Jonah Hill, Miles Teller, Daniel Radcliffe, Blake Lively, Sofia Boutella, Eugenio Derbez, Kylie Rogers, Eiza Gonzalez, Diego Boneta, Milla Jovovich, Finn Wolfhard, the director Andy Muschetti, etc.Elisa also studied a technical career in Cinematography at the Association of Independent Filmmakers of Mexico (AMCI), that's why she has always been interested in movie direction and production. She has produced many short films, some of these are: the horror short film "Necrolatría", the suspense thriller "Osculum Mortis", the video clip "So rich", the documentary short film "My life in you", the horror short film "Adan's Flesh", the short film comedy "Don't fuck it up my friend", the dramatic short film "Catharsis", the science fiction short film "Isaac" and the documentary short film "The Power of the Name". She also produced her own cover video clip of the famous Christmas song "Last Christmas".She has acted in the short films: "They", "Necrolatría", "Osculum Mortis" and "Nightbe