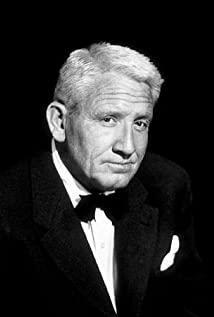 Spencer Tracy was the second son born on April 5, 1900, to truck salesman John Edward and Caroline Brown Tracy in Milwaukee, Wisconsin. While attending Marquette Academy, he and classmate Pat O'Brien quit school to enlist in the Navy at the start of World War I. Tracy was still at Norfolk Navy Yard in Virginia at the end of the war. After playing the lead in the play "The Truth" at Ripon College he decided that acting might be his career.Moving to New York, Tracy and O'Brien, who'd also settled on a career on the stage, roomed together while attending the Academy of Dramatic Arts. In 1923 both got nonspeaking parts as robots in "R.U.R.", a dramatization of the groundbreaking science fiction novel by Czech author Karel Capek. Making very little money in stock, Tracy supported himself with jobs as bellhop, janitor and salesman until John Ford saw his critically acclaimed performance in the lead role in the play "The Last Mile" (later played on film by Clark Gable) and signed him for The William Fox Film Company's production of Up the River (1930). Despite appearing in sixteen films at that studio over the next five years, Tracy was never able to rise to full film star status there, in large part because the studio was unable to match his talents to suitable story material.During that period the studio itself floundered, eventually merging with Darryl F. Zanuck, Joseph Schenck and William Goetz's William 20th Century Pictures to become 20th Century-Fox). In 1935 Tracy signed with MGM under the aegis of Irving Thalberg and his career flourished. He became the first actor to win back-to-back Best Actor Oscars for Captains Courageous (1937) and, in a project he initially didn't want to star in, Boys Town (1938).During Tracy's nearly forty-year film career, he was nominated for his performances inSan Francisco (1936), Father of the Bride (1950), Bad Day at Black Rock (1955), The Old Man and the Sea (1958), Inherit the Wind (1960), Judgment at Nuremberg (1961), and Guess Who's Coming to Dinner (1967).Tracy had a brief romantic relationship with Loretta Young in the 1930s, and a lifelong one with Katharine Hepburn beginning in 1942 after they were first paired in Woman of the Year by director George Stevens. Tracy's strong Roman Catholic beliefs precluded his divorcing wife Louise, though they mostly lived apart. Tracy suffered from severe alcoholism and diabetes (from the late 1940s), which led to his declining several tailor-made roles in films that would become big hits with other actors in those roles. Although his drinking problems were well known, he was considered peerless among his colleagues (Tracy had a well-deserved reputation for keeping co-stars on their toes for his oddly endearing scene-stealing tricks), and remained in demand as a senior statesman who nevertheless retained box office clout. Two weeks after completion of Stanley Kramer's Guess Who's Coming to Dinner (1967), during which he suffered from lung congestion, Spencer Tracy died of a heart attack.