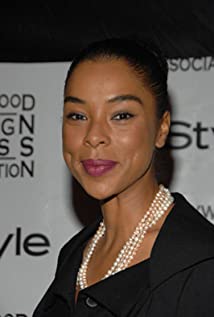 Sophie Okonedo is a British actress. She was nominated for the Academy Award for Best Supporting Actress for her role as Tatiana Rusesabagina in Hotel Rwanda (2004).Okonedo was born within London in 1968. Her parents were Henry Okonedo (1939-2009) and Joan Allman. Her father was British Nigerian, and was employed as a government worker. Her mother was a British Jew and was employed as a Pilates teacher. Sophie's maternal grandparents were Yiddish-speaking emigrants to the United Kingdom, one from Poland and the other from Russia.Henry Okonedo abandoned his family c. 1973, when Sophie was 5-years-old. Joan raised her daughter as a single mother. Sophie was brought up in the Chalkhill Estate, a large council estate within the Wembley Park district of the London Borough of Brent. The Chalkhill Estate consisted of "about 1900 houses and flats", and was located at a short distance from the Wembley Stadium. The Chalkhill Estate was often vandalized by football hooligans during during the 1970s, and suffered from high crime rates from the 1970s to the 1990s. The Estate's buildings were eventually demolished in 2000.Sophie was raised as a practicing Jew, and always had access to books despite her family's relative poverty. She chose to follow acting as a profession, and was trained at the Royal Academy of Dramatic Art, one of the oldest and most prestigious drama schools in the United Kingdom.Okonedo made her film debut at the age of 23, in the coming-of-age film "Young Soul Rebels" (1991). The film was a historical fiction work, examining the youth culture of London in the late 1970s, and the interactions between different culture movements: the skinheads, the punks, and the soul-boys. Sophie Okonedo played Tracy, the girlfriend of the main character Chris (played by Valentine Nonyela).In 1995, Okonedo gained the role of Moira Levitt in the first season of the prison drama "The Governor" (1995-1996). The series primarily concerned the lives of a prison's staff members. Also in 1995, Okonedo played the role of the Wachati Princess, Ace Ventura's love interest in the comedy film "Ace Ventura: When Nature Calls". In the film, the virgin princess of an African tribe has been engaged to a heir from another tribe, but disagrees with the arranged marriage and attempts to seduce pet detective Ace Ventura (played by Jim Carrey) instead. Ace has recently become a Buddhist monk and has taken an oath of celibacy, but feels tempted by the offer.From 1996 to 1997, Okonedo played the main role of Kelly Booth in the medical drama series "Staying Alive". In 2000, Okonedo played a main role in the legal drama mini-series "In Defence". While originally planned to be a multi-season television series, the series was cut short due to poor ratings.In 2000, Okonedo co-stared in the dramatic television film "Never Never". She was nominated for a "Royal Television Society Award for Best Actor - Female", for her role in the film. In 2002, Okonedo played the role of the prostitute Juliette in the social thriller film "Dirty Pretty Things", which depicted the lives of impoverished immigrants in London.In 2003, Okonedo voiced the role of Alison Cheney in the flash-animated series "Scream of the Shalka", a spin-off of "Doctor Who". In the series, Alison is a barmaid at a Lancashire village who becomes the newest time-traveling companion of the Doctor (played by Richard E. Grant). Alison also befriends the Master (played by Derek Jacobi), an arch-enemy-turned-assistant of the Doctor who is permanently trapped within the time machine known as the Tardis.In 2004, the 36-year-old Okonedo had her breakthrough role as the co-star of the historical drama film "Hotel Rwanda", depicting the Rwandan genocide (1994). Okonedo played the historical figure Tatiana Rusesabagina (1958-), a professional nurse from the Tutsi ethnic group who helped over a 1000 individuals to escape the massacre. Okonedo won a Black Reel Award for Best Actress for her role. She was also nominated for the Academy Award for Best Supporting Actress, but the Award for that year was won by rival actress Cate Blanchett (1969-).In 2005, Okonedo had the role of Sithandra in the science fiction film "Æon Flux". The film was set in the 25th century, within the fictional city-state of Bregna. The characters Æon Flux (played by Charlize Theron) and Sithandra are female assassins, tasked with assassinating Trevor Goodchild, the local head-of-state. But in the process, Æon finds out that the city-state's main rebel-organization is actually a tool for a coup d'état orchestrated by other politicians. And also discovers some dark secrets about the city's past. The film gained a worldwide box office total of 52 million dollars, smaller than its actual budget,In 2006, Okonedo played the intelligence agent "Mrs. Jones" in the spy film "Stormbreaker", an adaptation of the "Alex Rider" novel series by Anthony Horowitz (1955-). In the film, Mrs. Jones (full name "Tulip Jones" in the novels) is an an ag