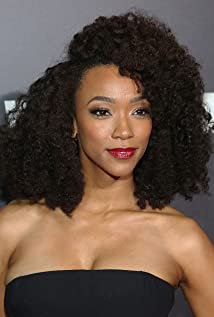 Sonequa Martin-Green (born March 21, 1985) is an American actress and producer. She is best known for her television role as Sasha Williams on The Walking Dead, a role she played from 2012 to 2017. Before that, she had starred in several independent films before gaining her first recurring role as Courtney Wells on The Good Wife. Later, she had recurring roles as Tamara in Once Upon a Time and Rhonda in New Girl. She plays the lead role as Michael Burnham in the television series Star Trek: Discovery.Martin-Green was born in Russellville, Alabama. She has one sister and three older half-sisters. She had initially planned to become a psychologist before deciding to pursue a career in acting when she was in the tenth grade. On her decision to become an actor, she said, "I didn't know I was going to be an actor until I was 16. I thought I was going to be a psychologist, which is interesting because it's very similar to acting. I was fascinated with human behaviour and why people do what they do. I was in the middle of rehearsal in 10th grade when I had this epiphany. And so I got my theatre degree from the University of Alabama."After graduating from the University of Alabama in 2007 with a degree in theatre, she relocated to New York City where she and her husband, Kenric, lived for five years before moving to California.While known primarily for her television roles, Sonequa Martin-Green made her debut in film with various film roles since 2005. In 2009, she played the lead role of Tosha Spinner in Toe to Toe opposite Louisa Krause, the fiercely determined scholarship student who seeks to build a brighter future outside of Anacostia and away from one of Washington's poorest neighborhoods. The film focuses on her friendship and rivalry with Jessie (Louisa Krause), a privileged girl from Bethesda whose promiscuous tendencies threaten to become her undoing. They both strive to gain a better understanding of one another's plight as society threatens to drive them ever farther apart. The film received generally positive reviews, with Martin-Green's performance receiving critical acclaim, even from the film's detractors.Martin-Green has had various guest and recurring roles in TV shows. She made her television debut in 2008, appearing on NBC's Law & Order: Criminal Intent as Kiana Richmond. She then gained her first recurring role on Army Wives as Kanessa Jones the following year. In 2009, she received the role of Courtney Wells on The Good Wife, her first recurring role playing an adult character as opposed to playing a teenager with her previous roles in both film and television. She appeared on the show for two years before making two more appearances in Gossip Girl and NYC 22 in 2011.In 2012, Sonequa Martin-Green was cast in a recurring role on The Walking Dead as Sasha, the sister of Tyreese (Chad Coleman), an original character, exclusive to the television series. Martin-Green auditioned for the role of Michonne albeit with a pseudonym due to the secrecy of the auditioning process. When Danai Gurira, whom Martin-Green said was "the perfect choice", was cast, former showrunner Glen Mazzara still wanted Martin-Green to be a part of the show and decided to create a role specifically for her instead. Martin-Green explained: "[Sasha] was supposed to be a recurring character and as we kept going forward, they picked up my option to be a regular. It's very rare and I'm still quite dumbfounded about it but Glen and I hit it off and I still appreciate him. He wanted to work with me and wrote Sasha for me." She was promoted to a series regular for season 4 with Emily Kinney and Coleman.After auditioning for the role of Michonne, she read the first three volumes of the graphic novels in preparation for the television series. Knowing they were different, she chose not to continue reading the comic book series to avoid being aware of future storylines that may occur on the television series. Martin-Green's performance as Sasha, particularly in the fifth season and seventh season, has received favorable reviews.After filming for the third season of The Walking Dead ended, Martin-Green was cast in the second season of Once Upon a Time playing the recurring role of Tamara, a woman determined to rid the world of magic. She returned briefly in the third season before returning to her regular role as Sasha on The Walking Dead. As of the first episode of sixth season, Martin-Green's name appears in the opening credits.In December 2016, her role as the lead actor of Star Trek: Discovery as a lieutenant commander of the USS Discovery was made public. She debuted as First Officer Michael Burnham in "The Vulcan Hello" on September 24, 2017.Martin-Green has been married to fellow actor Kenric Green since December 4, 2010. They met while acting together in the play, Fetch Clay, Make Man, at the McCarter Theater in Princeton, New Jersey. In 2015, in Los Angeles, Martin-Green gave birth to a boy named Kenric Justin Green II after his f

Yelling to the Sky

Rivers Wash Over Me