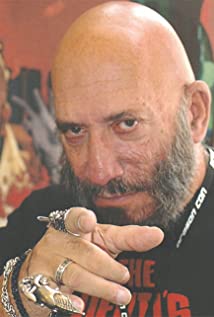 Tall, bald and nearly always bearded, Sid Haig provided hulking menace to many a low-budget exploitation film and high-priced action film.Sid Haig was born Sidney Eddie Mosesian on July 14, 1939 in Fresno, California, a screaming ball of hair. His parents, Roxy (Mooradian) and Haig Mosesian, an electrician, were of Armenian descent. Sid's career was somewhat of an accident. He was growing so fast that he had absolutely no coordination. It was decided that he would take dancing lessons, and that's when it all began. At the age of seven, he was dancing for pay in a children's Christmas Show, then a revival of a vaudeville show... and on it went.Sid also showed a musical inclination, particularly for the drums. So when his parents got tired of him denting all the pots and pans in the house, they bought him a drum set. The music was in him and he took to it immediately, a born natural. First it was swing, then country, then jazz, blues and rock 'n' roll. Sid always found it easy to make money with his music, and did very well. One year out of high school and signing a recording contract is not too bad. Sid went on to record the single "Full House" with the T-Birds in 1958. However, back while he was in high school, Sid got bitten by the "acting bug". Alice Merrill was the head of the drama department at that time and gave him all the encouragement in the world to pursue an acting career. The clincher came in his senior year. The way that the senior play was cast was that she would double cast the show, then have one of her friends from Hollywood come up and pick the final cast.You see, Merrill was quite famous as an actress on Broadway and kept up her contacts in the business. When the appointed day came, the "friend" that showed up was Dennis Morgan, a big musical comedy star from the 1940s. The rest is history -- he picked Sid for the role, then two weeks later came back to see the show and told Sid that he should continue his education down south and consider acting as a career path. Two years later, Sid enrolled in the world famous Pasadena Playhouse, the school that trained such actors as Robert Preston, Robert Young, Gene Hackman, Dustin Hoffman, and so on. After two years of "actor's hell" (non-stop 7:00 am to 11:00 pm with homework thrown in just for the fun of it), it was time to move on to the big "H", Hollywood! Sid did so with longtime friend and roommate Stuart Margolin (Angel on The Rockford Files (1974)).Sid's first acting job was in Jack Hill's student film at UCLA. It was called The Host (1960), which was released in 2004 on DVD as a companion to Switchblade Sisters (1975), another Hill film. That role launched a 40-year acting career during which Haig appeared in over 50 films and 350 television series. He has proven himself quite valuable to such filmmakers as producer Roger Corman. He also became a staple in the pictures of Jack Hill, appearing in Spider Baby or, the Maddest Story Ever Told (1967), Coffy (1973) and Foxy Brown (1974). Haig's other memorable credits include George Lucas' THX 1138 (1971), and the James Bond opus Diamonds Are Forever (1971) (he is one of the Slumber Brothers, and got to toss a topless Lana Wood from the window of a high-rise Vegas hotel).Among his most significant television credits are appearances on such landmark series as The A-Team (1983), T.J. Hooker (1982), The Dukes of Hazzard (1979), Quincy M.E. (1976), Hart to Hart (1979), Fantasy Island (1977), Charlie's Angels (1976), Police Woman (1974), The Rockford Files (1974), The Six Million Dollar Man (1974), Mannix (1967), Mission: Impossible (1966), Gunsmoke (1955), Get Smart (1965), Here's Lucy (1968), The Flying Nun (1967), Daniel Boone (1964), Star Trek: The Original Series (1966), Batman (1966) and The Untouchables (1959).Sid was never one to give-up on anything but after nearly 40 years of carrying a gun (except for the occasional Jack Hill or Roger Corman film), his dreams of being recognized as a more than competent actor were fading. Then in 1992, frustrated with being typecast, Sid retired from acting and quoted, "I'll never play another stupid heavy again, and I don't care if that means that I never work, ever." This just proves that if you take a stand people will listen, for Quentin Tarantino wrote for Sid the role of the judge in Jackie Brown (1997). Then things got better, much better. During the mid and late 1990s, Sid managed a community theatre company, as well as dabbled occasionally in theater in Los Angeles.Then in 2000, Sid came out of his self-imposed retirement at the request of Rob Zombie for a role in Zombie's debut film House of 1000 Corpses (2003). He starred as the fun-loving, but murderous, Captain Spaulding. This role breathed new life into Sid's acting career and earned him an award for Best Supporting Actor in the 13th Annual Fangoria Chainsaw Awards, as well as an induction into the Horror Hall of Fame. Sid's character Captain Spaulding became an icon for the new horror genre.

High on the Hog

I Am Santa Claus

Devil in My Ride