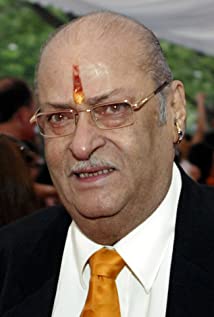 Shamsher Raj "Shammi" Kapoor was the son of theater and film actor Prithviraj Kapoor and his wife Ramsarni "Rama" Mehra Kapoor. Shammi's acting career began in 1948, when he joined his father's theatrical company "Prithvi Theatres." Like his father and his brothers, Shammi eventually moved into the world of movie-making. He made his big screen debut in 1953. His earliest films were mostly low-budget swashbucklers and romances that failed to succeed at the box office. Shammi referred to himself at that point in his career as a "male starlet."In April of 1955, on the sets of Rangin Raaten (1956), Shammi met and fell in love with the actress Geeta Bali. She was an established actress, and he was still struggling in his career. Four months later, Geeta agreed to marry Shammi and they wed in small ceremony witnessed by Hari Walia who produced and directed their next film together Coffee House (1957). The couple had two children, a son Aditya Raj born in 1956 and a daughter Kanchan born in 1961.The film Tumsa Nahin Dekha (1957) was a turning point in Shammi's career. For this film, he cut his hair and shaved off his pencil-thin mustache; creating a new look and persona. The film was a success and was soon followed by more hits. By 1961, Shammi's boisterous shout of "Yahoo!" and his exuberant hip-shaking dance moves, in his first color picture Junglee (1961), had made him a star. His natural talent for dancing and his modern and casual fashion sense brought him comparisons to Elvis Presley, and Shammi became known as the "Rebel Star."In 1965, while Shammi was filming Teesri Manzil (1966), his wife Geeta fell ill with smallpox and passed away. After months away from the set, Shammi eventually returned to film the song "Tumne Mujhe Dekha." Shammi's success continued and in 1968, his acting talent was formally recognized. He received the Filmfare Best Actor award for his role in Brahmachari (1968).In 1969, Shammi married Neila Devi from the former royal family of Bhavanagar. Their families had long been friends and they first met when Neila was 9 and Shammi was 19. Neila later recalled that Shammi had pulled her pigtails while she was watching one of his plays from the backstage wings. Shammi's sister-in-law first suggested the match to him. Eventually, Shammi called Neila on the phone to propose. They spent hours talking, and were married the next day.By the 1970s, Shammi's weight gain and competition from other popular actors was taking a toll on his status as a romantic hero. Andaz (1971) was one of his last hits as a leading man.Shammi enjoyed directing two films, Manoranjan (1974) and Bundal Baaz (1976). The films met with some critical success but neither did well at the box-office. As the '70s continued, Shammi began transferring his acting talents into supporting roles. He won another Filmfare Award for Best Supporting Actor in Vidhaata (1982).Shammi took to the Internet early, and was the founder and chairman of Internet Users Community of India. He managed his own website and made online videos to speak directly to his fans. He loved to share stories about his career, his friends, and his famous family: father Prithviraj Kapoor, elder brother Raj Kapoor, younger brother Shashi Kapoor, and their spouses, children, and grandchildren; many of whom work in the film industry.In later years, Shammi continued to take on supporting roles in film and TV. He was presented with the Filmfare Lifetime Achievement Award in 1995. His last film was the posthumously released Rockstar (2011), in which he appeared alongside his great-nephew Ranbir Kapoor.The last seven years of his life, he suffered from chronic renal failure and underwent dialysis three times a week. But it never dampened his warmhearted spirit, until the end he continued to share his joy for life. Shammi Kapoor passed away around 5:15 am, August 14th, 2011 at Mumbai Breach Candy hospital.