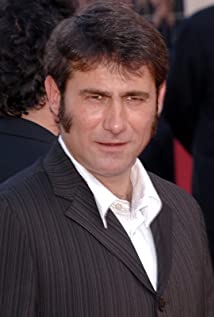 Sergi López is a Spanish actor, whose specialty is villains of all types but whose range also includes dramatizing romantic and comedic roles with equal mastery. He was born outside of Barcelona in the seaside town of Villanova i la Geltrú on December 22nd, 1965. As a youth he was inclined towards the performance arts and headed to France for further studies in the field. In 1991 he auditioned for French director Manuel Poirier who was so impressed with Sergi that he gave him the lead role in "Western." Poirier and López continued to collaborate on "La Petite-Amie d'Antonio," "La Campagne," "Attention Fragile," and "Marion" in subsequent years. Sergi often played the charming Spanish immigrant lost in France in Poirier's films.Sergi's career was actually cemented in France that catapulted him to public recognition, while Spain was still relatively oblivious to her talented son until 1997. In 1997 Sergi appeared in Catalan auteur Ventura Pons' "Caricies" that also showcased Spain's finest actors. He spoke Catalan in the role. After "Caricies" Sergi appeared in Spanish cinema more frequently such as in "Entre las piernas" with Spanish mega-stars Javier Bardem and Victoria Abril and in "Lisboa" with Spanish legend Carmen Maura. Sergi was then offered plum roles both in France and Spain and split time traveling back and forth between his adopted nation and native motherland.In 2001 he won the César for his role in Dominick Moll's "Harry, Un Ami Qui Vous Veut du Bien." This role came to define his mastery on villainous roles which continued in "Solo Mia" with Paz Vega as his battered wife, Stephen Frears' "Dirty Pretty Things" with Chiwetel Ejiofor and Audrey Tautou as his scared pawns, and Guillermo del Toro's "El Laberinto del Fauno" with post-Civil Spain as playground for his Vidal's sadism.However, not all is dark villainy in Sergi's most recognized and praised thespian filmography. Sergi also displayed his comedic talents in "Hombre Felices" and "Janis et John."With such range, talent, and skill, it is no wonder horror master and aficionado Guillermo del Toro said he is "in love" with Sergi's work and insisted on casting him as the stone-cold killer Captain Vidal despite Spanish producers' misgivings. Let us hope that, despite wider international exposure, Sergi continues to retain his unique avant-gardeness and participate only in projects that do his talent justice.

7 Reasons to Run Away (from Society)

If I Hadn't Met You