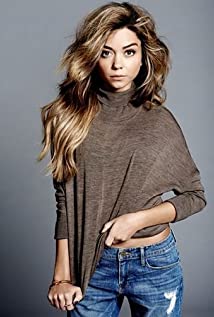 Sarah Hyland was born in New York City to actors Melissa D. Canaday and Edward James Hyland. She began in the business at the age of 4 with commercial work and voice overs. Her first film was Private Parts (1997). She then moved on to The Object of My Affection (1998) and then spent time on Another World (1964) as "Rain Wolfe", a child found in the park, and fostered by Josie and Gary. Sarah would go on to work with Amy Carlson ("Josie" on AW) several more times: Falcone (2000), Law & Order (1990) and Law & Order: Trial by Jury (2005). Sarah was cast as one of the young "Audrey Hepburns" in Jennifer Love Hewitt's The Audrey Hepburn Story (2000) the same year she was cast as "Molly" in ABC's The Wonderful World of Disney: Annie (1999) starring Kathy Bates, Audra McDonald, Alan Cumming, Victor Garber and Kristin Chenoweth, Joe Gould's Secret (2000) and Falcone (2000). Aside from all of her film and television work, Sarah studied voice, ballet, jazz, hip-hop, tap, Theatre Dance, and performed with her tap and Theatre dance class at "Reel to Real" at Lincoln Center as invited performers.A New York-born and raised girl, Sarah spent much of her time working in film, television, and voicing many radio ads, as well as traveling with her father, Edward James Hyland, while he worked at many different theaters in the country. She was home schooled by her mother until 2nd grade and then attended Public School. In 6th Grade, she was accepted into PPAS (Professional Performing Arts School) where she stayed until she graduated in 2008. When Sarah turned 18, she moved to Los Angeles, CA and, within two weeks, had landed a pilot named "My American Family". Once picked up the name was changed to Modern Family (2009). To date, Sarah portrays "Haley Dunphy", the eldest Dunphy child. Modern Family (2009) has won multiple awards most notably the Emmy for Outstanding Comedy Series.Before moving to L.A., Sarah did a multitude of film and television and, at the age of 11 1/2, she made her stage debut at Papermill Playhouse in Millburn, NJ in the title role of "Annie". From there, Sarah added many more stage productions to her resume including "Bad Girls", "Dark Part of the Forest" and both productions on and off Broadway of "Grey Gardens" in the role of "Jackie Bouvier". "Grey Gardens" was nominated for Best Musical at the Tony Awards, and Christine Ebersole and Mary Louise Wilson won Best Actress and Best Supporting Actress Tony's for their work. William Ivey Long won for his costume design. Sarah also did many development workshops including: "A Little Princess", "Bye Bye Birdie', and "Shrek, the Musical", to name a few. Sarah has worked with some of the top talent in the Industry: Tim Robbins, Stanley Tucci, Ian Holmes, Steve Martin, John Turturro, Hope Davis, Keir Dullea, Frances Fisher, Brooke Shields, Kim Raver, Lindsay Price, Timothy Busfield, among so many other incredible talents. She has guest starred on Touched by an Angel (1994), Law & Order: Trial by Jury (2005) and twice on Law & Order: Special Victims Unit (1999). Her second turn on Law & Order: Special Victims Unit: Hothouse (2009) gave her a breakthrough role where she portrayed "Jennifer Banks", a student at a school for the gifted who kills her roommate in a drug fueled rage.Her work on Lipstick Jungle (2008) as Brooke Shields's daughter further showcased her talent and, because of LJ's cancellation, drew her to Los Angeles and the role of "Haley Dunphy" on Modern Family (2009).Sarah has a maltipoo named Barkley, and is happily living in the Los Angeles Area. She is the Face of "Wallflower Jeans". Sarah's brother, Ian Donovan Hyland, is also an actor and, even though most think Ian is her older brother, he is really 4 years her junior. Her father is a stage and film actor based in New York, and her mother is an acting coach to young actors.