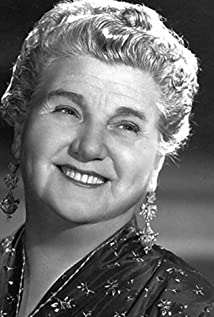 The legendary "granny of Mexican cinema" began her movie career when she was a 22-year-old teacher in a nun's school for girls. One day, young Sara's attention was attracted to a small building in downtown Mexico City. Inside it was Azteca Films, one of the very first Mexican film production companies, about to produce its first feature: Alma de sacrificio (1917). The leading lady was stage actress turned film producer (and writer, actress, editor and, maybe director) Mimí Derba. After some screening tests, young Sara was offered a contract. She accepted although she didn't say a word in her college until many months after. Her early experiences in movies lead her to a career in stage. She only made one film between 1918 and 1933. She returned to the screen in Death Flight (1934) and began a very long career of 148 films. Almost from the beginning, Sara García specialized in portraying mothers and grandmas, hence her nickname. This specialization began when she dared to remove her entire teeth to get the role of a granny in Allá en el Trópico (1940). After that tremendous tour-de-force her entire career, with very few exceptions, was devoted to this kind of roles. She co-starred with almost the entire cast of Mexican movie stars from the '30s to the '70s. Her films are still popular because they're on TV very often.

You're Missing the Point