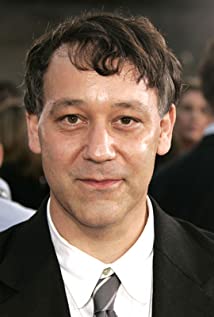 Highly inventive U.S. film director/producer/writer/actor Sam Raimi first came to the attention of film fans with the savage, yet darkly humorous, low-budget horror film, The Evil Dead (1981). From his childhood, Raimi was a fan of the cinema and, before he was ten-years-old, he was out making movies with an 8mm camera. He was a devoted fan of The Three Stooges, so much of Raimi's film work in his teens, with good friends Bruce Campbell and Rob Tapert, was slapstick comedy based around what they had observed from "Stooges" movies.Among the three of them, they wrote, directed, produced and edited a short horror movie titled Within the Woods (1978), which was then shown to prospective investors to raise the money necessary to film The Evil Dead (1981). It met with lukewarm interest in the U.S. with local distributors, so Raimi took the film to Europe, where it was much more warmly received. After it started gaining positive reviews and, more importantly, ticket sales upon its release in Europe, U.S. distributors showed renewed interest, and "Evil Dead" was eventually released stateside to strong box office returns. His next directorial effort was Crimewave (1985), a quirky, cartoon-like effort that failed to catch fire with audiences. However, he bounced back with Evil Dead II (1987), a racier and more humorous remake/sequel to the original "Dead" that did even better at the box office. Raimi was then given his biggest budget to date to shoot Darkman (1990), a comic book-style fantasy about a scarred avenger. The film did moderate business, but Raimi's strong visual style was evident throughout the film via inventive and startling camera work that caught the attention of numerous critics.The third chapter in the Evil Dead story beckoned, and Raimi once again directed buddy Campbell as the gritty hero "Ash", in the Gothic horror Army of Darkness (1992). Raimi surprised fans when he took a turn away from the fantasy genre and directed Gene Hackman and Sharon Stone in the sexy western, The Quick and the Dead (1995); four years later, he took the directorial reins on A Simple Plan (1998), a crime thriller about stolen money, starring Bill Paxton and Bridget Fonda. In early 1999, he directed the baseball film, For Love of the Game (1999), and, in 2000, returned to the fantasy genre with a top-flight cast in The Gift (2000). In 2002, Raimi was given a real opportunity to demonstrate his dynamic visual style with the big-budget film adaptation of the Stan Lee comic book superhero, Spider-Man (2002), and fans were not disappointed. The movie was strong in both script and effects, and was a runaway success at the box office. Of course, Raimi returned for the sequel, Spider-Man 2 (2004), which surpassed the original in box-office takings.

Murder of a Cat