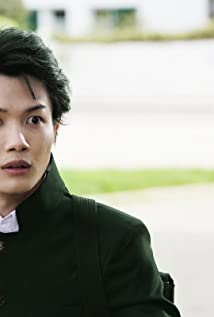 Ryunosuke Kamiki was born in Fujimi. He was diagnosed with a rare disease soon after he was born and was lucky enough to become one of the 1% who survived the disease. To celebrate this miracle, his mother decided to register him as a child actor in an agency to record his growth. He acted in his first TV ad when he was 2 & quickly became one of the best child actors of his generation. He debuted in TV drama when he was 6, playing the stepson of the main character Takeshi Kurosawa (played by Japanese idol Masahiro Nakai) in the 1999's TV drama Good News. He also appeared briefly as a supporting actor in the 1998's drama Happy Mania and as since acted in numerous TV dramas, including Quiz (2000), Namida o fuite (2000), Mukodono! (2001), Wedding Planner(2001), Tantei Kazoku(2002). As he got older, he also started to act in big screen productions such as Insutoru (2004), Otosan no backdrop (2004), Ren'ai-shousetsu (2004) & Survive Style 5+ (2005).2005 was an important year in his career. He became the sole leading actor of a movie for the first time in Takashi Miike's Yokai daisenso (The Great Yokai War). The film was shown in Venice Film Festival that year, but he missed the red carpet because of jet lag and tiredness from the flight to Venice. His performance is widely praised both in Japan and internationally, winning him the Newcomer of the Year of 29th Japan Academy Prize. He also starred in the TV drama Aikurushii that year & became friends with his co-star Kanata Hongo, a fellow child actor.In 2007, he got his first sole leading role in a TV drama in detective drama Tantei Gakuen Q, playing alongside with many of his future high school classmates and friends including Mirai Shida & Hey! Say! JUMP's Ryosuke Yamada. He starred in an NHK Asadora (Dondo Hare (2007) for the first time, playing the brother of the leading female character. Other works that year also include Little DJ: Chiisana koi no monogatari, Toku no sora ni kieta and he is the leading stars in all of these film.Kamiki spent most of the year 2008 shooting the TV drama Kaze no gaaden in Hokkaido. The drama was written by famous Japanese screenwriter So Kuramoto, and Kamiki played the mentally-disabled son of the main character, Sadami Shiratori, who is starred by Kamiki's favourite actor Kiichi Nakai. Kamiki developed a father-and-son kind of friendship w/ Kiichi Nakai during filming.In 2010, he played one of his most famous characters in the TV series Keizoku 2: SPEC: Juichi Ninomae. His character was so widely loved that the producer of the series tried everything he could to get him to appear in the follow-up movie series of the show. In 2012, he played the famous Japanese tragic hero Minamoto no Yoshitsune in the NHK Taiga drama Taira no Kiyomori. As he also played young Minamoto no Yoshitsune in NHK 2005's Taiga drama Yoshitsune, he literately portrayed the life of Minamoto no Yoshitsune on small screens.Another important work by Kamiki's the Japanese Academy-Award winning film Kirishima, bukatsu yamerutteyo (The Kirishima Thing) in 2012. While almost the entire young Japanese acting generation shined in the film, he still managed to give an impressive performance as the leading star. He also influenced other young actors, many acting for the first time, to give their best performance as a senior actor.2013 was another productive year as the first year after he graduated from high school & became a full-time actor. Apart from continuing to act in the SPEC series film & acting in the TV mini-series Kogure shashinkan, he acted alongside Sho Sakurai in the TV drama Kazoku geemu. His performance was so great that he won best supporting actor at the 77th Drama Academy Awards while the highly-praised drama swept the awards. In 2015, he co-starred with Takeru Satoh in the well-received comic-based movie Bakuman as Akito Takagi. While the movie's about 2 high school students working hard as professional Japanese manga artists for Jump Magazine, he has said that Akito Takagi's 1 of the roles that's most like himself, as he has been a long-time manga lover.He's widely loved & appreciated by many famous Japanese actors as well as screenwriters. He worked w/ well-acclaimed Japanese screenwriter & director, Kankuro Kudo for the 1st time in 2011, playing the main character in the TV drama 11 nin mo iru!. They worked together again in the 2016 film Too Young to Die & for the 2019 NHK Taiga drama Idaten: Tokyo Olympics Banashi.He has also worked w/ director Keishi Ohtomo several times, who's famous for making good comics-adapted movies. He played Sojiro Seta in the 2011 film Ruroni Kenshin: Kyoto taika-hen (Rurouni Kenshin: Kyoto Inferno) & Ruroni Kenshin: Densetsu no saigo-hen (Rurouni Kenshin: The Legend Ends). As a fan of the original manga series Ruroni Kenshin & Sojiro Seta, he practiced for the role even before he was officially cast for it. He was the 1st choice for Rei Kiriyama, the main character of 3-gatsu no raion zenpen (March Comes in Like

Too Young to Die