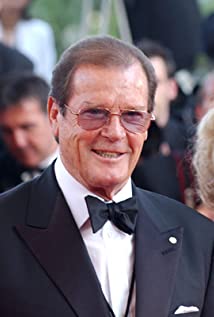 Roger Moore will perhaps always be remembered as the man who replaced Sean Connery in the James Bond series, arguably something he never lived down.Roger George Moore was born on October 14, 1927 in Stockwell, London, England, the son of Lillian (Pope) and George Alfred Moore, a policeman. His mother was born in Calcutta, India, to a British family. Roger first wanted to be an artist, but got into films full time after becoming an extra in the late 1940s. He came to the United States in 1953. Suave, extremely handsome, and an excellent actor, he received a contract with Metro-Goldwyn-Mayer. His initial foray met with mixed success, with movies like Diane (1956) and Interrupted Melody (1955), as well as The Last Time I Saw Paris (1954).Moore went into television in the 1950s on series such as Ivanhoe (1958) and The Alaskans (1959), but probably received the most recognition from Maverick (1957), as cousin Beau. He received his big breakthrough, at least internationally, as The Saint (1962). The series made him a superstar and he became very successful thereafter. Moore ended his run as the Saint, and was one of the premier stars of the world, but he was not catching on in America. In an attempt to change this, he agreed to star with Tony Curtis on ITC's The Persuaders! (1971), but although hugely popular in Europe, it did not catch on in the United States and was canceled. Just prior to making the series, he starred in The Man Who Haunted Himself (1970), which proved there was far more to Moore than the light-hearted roles he had previously accepted.He was next offered and accepted the role of James Bond, and once audiences got used to the change of style from Connery's portrayal, they also accepted him. Live and Let Die (1973), his first Bond movie, grossed more outside of America than Diamonds Are Forever (1971); Connery's last outing as James Bond. He went on to star in another six Bond films, before bowing out after A View to a Kill (1985). He was age 57 at the time the film was made and was looking a little too old for Bond - it was possibly one film too many. In between times, there had been more success with appearances in films such as That Lucky Touch (1975), Shout at the Devil (1976), The Wild Geese (1978), Escape to Athena (1979) and North Sea Hijack (1980).Despite his fame from the Bond films and many others, the United States never completely took to him until he starred in The Cannonball Run (1981) alongside Burt Reynolds, a success there. After relinquishing his role as Bond, his work load tended to diminish a little, though he did star in the American box office flop Fire, Ice & Dynamite (1990), as well as the comedy Bullseye! (1990), with Michael Caine. He did the overlooked comedy Bed & Breakfast (1991), as well as the television movie The Man Who Wouldn't Die (1994), and then the major Jean-Claude Van Damme flop The Quest (1996). Moore then took second rate roles such as Spice World (1997), and the American television series The Dream Team (1999). Although his film work slowed down, he was still in the public eye, be it appearing on television chat shows or hosting documentaries.Roger Moore was appointed Commander of the Order of the British Empire on December 31, 1998 in the New Years Honours for services to UNICEF, and was promoted to Knight Commander of the same order on June 14, 2003 in the Queen's Birthday Honours for services to the charities UNICEF and Kiwanis International.Roger Moore died of cancer on 23 May, 2017, in Switzerland. He was 89.

A Princess for Christmas