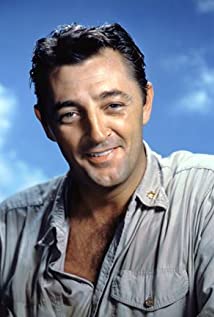 Robert Mitchum was an underrated American leading man of enormous ability, who sublimated his talents beneath an air of disinterest. He was born in Bridgeport, Connecticut, to Ann Harriet (Gunderson), a Norwegian immigrant, and James Thomas Mitchum, a shipyard/railroad worker. His father died in a train accident when he was two, and Robert and his siblings (including brother John Mitchum, later also an actor) were raised by his mother and stepfather (a British army major) in Connecticut, New York, and Delaware. An early contempt for authority led to discipline problems, and Mitchum spent good portions of his teen years adventuring on the open road. He later claimed that on one of these trips, at the age of 14, he was charged with vagrancy and sentenced to a Georgia chain gang, from which he escaped. Working a wide variety of jobs (including ghostwriter for astrologist Carroll Righter), Mitchum discovered acting in a Long Beach, California, amateur theater company. He worked at Lockheed Aircraft, where job stress caused him to suffer temporary blindness. About this time he began to obtain small roles in films, appearing in dozens within a very brief time. In 1945, he was cast as Lt. Walker in Story of G.I. Joe (1945) and received an Oscar nomination as Best Supporting Actor. His star ascended rapidly, and he became an icon of 1940s film noir, though equally adept at westerns and romantic dramas. His apparently lazy style and seen-it-all demeanor proved highly attractive to men and women, and by the 1950s, he was a true superstar despite a brief prison term for marijuana usage in 1949, which seemed to enhance rather than diminish his "bad boy" appeal. Though seemingly dismissive of "art," he worked in tremendously artistically thoughtful projects such as Charles Laughton's The Night of the Hunter (1955) and even co-wrote and composed an oratorio produced at the Hollywood Bowl by Orson Welles. A master of accents and seemingly unconcerned about his star image, he played in both forgettable and unforgettable films with unswerving nonchalance, leading many to overlook the prodigious talent he can bring to a project that he finds compelling. He moved into television in the 1980s as his film opportunities diminished, winning new fans with The Winds of War (1983) and War and Remembrance (1988). His sons James Mitchum and Christopher Mitchum are actors, as is his grandson Bentley Mitchum. His last film was James Dean: Race with Destiny (1997) with Casper Van Dien as James Dean.

Berkeley in the Sixties