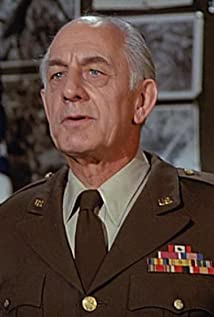 A prolific character actor of imposing presence, Robert F. Simon drifted into acting via the Cleveland Playhouse, hoping that this would cure his natural propensity for shyness. After training at the Actor's Studio in New York he had a ten year run on Broadway (1942-52) in which he cut his teeth -- both as actor and as stage manager -- on anything from drama to musical comedy. In a roundabout way, he was even able to fulfill his original career goal of becoming a traveling salesman: as understudy to the great Lee J. Cobb as Willy Loman in Arthur Miller's "Death of a Salesman".Robert started in films in 1950, but over the years came often to be typecast in stereotypical roles of benevolent authoritarianism or grouchy executive stress. At times he drew unkind reviews from the critics. He was considerably better served by the small screen, where, for some 35 years, he became a familiar face as generals, police captains, doctors, journalists and attorneys. We may remember him most fondly as George Armstrong Custer's disapproving superior, General Alfred Terry, in Custer (1967); as the sympathetic, long-suffering father of Darren Stephens in Bewitched (1964); or as Maynard M. Mitchell, one of the wackiest of generals ever to have served in the Korean War (or any other war, for that matter), in M*A*S*H (1972).