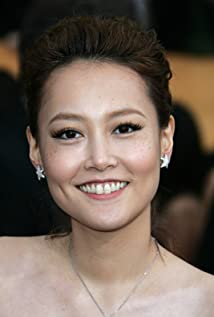 Rinko was born Kikuchi Yuriko in Hadano just south of Tokyo. The town is known mainly for its green tea and public baths. She is the youngest of three siblings. After being scouted on the street, she began modeling in her hometown and subsequently began acting under her birth name before switching to Rinko. She appeared in the cult film The Taste Of Tea, but came to mainstream audiences' attention for her role in Babel, for which she had learned sign language. She played a deaf-mute. She was the first Japanese actress to be nominated for the Oscars in 50 years, since Umeki Miyoshi. Other than that she had appeared in commercials, including ads for Chanel and Yves Saint Laurent, as well as Japanese soap operas. As a result, her popularity rose outside her native country. She moved to New York City and lived for a time with director Spike Jonze, whom she had met in Tokyo at a film festival in 2009. That's when she began taking English lessons. While she had appeared in the acclaimed film version of Norwegian Wood, her later American were mostly popcorn flicks like 47 Ronin and Pacific Rim. Her success and foray into American entertainment continued with her castings in Kumiko, and Westworld. Rinko married Japanese actor Sometani Shota in 2014 and gave birth to a son in October 2016. She is a capable rider of horses and motorcycles and grew up watching samurai films.

We Are Little Zombies