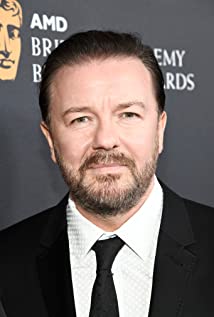 Ricky Dene Gervais was born in a suburb of Reading, Berkshire, to Eva Sophia (House) and Lawrence Raymond Gervais, who was a hod carrier and labourer. His father was born in Ontario, Canada, of French-Canadian descent, and his mother was English. He was educated at Ashmead Comprehensive School and went on to study at University College, London, where he gained a degree in Philosophy.After university, Gervais attempted to pursue a pop career with Seona Dancing, a duo he formed with a fellow student. Similar to many groups in the early 1980s, they were a synth-pop act with a somewhat pretentious name and exhibiting a strong musical influence by David Bowie. Gervais adopted a vocal style that has often been compared to Bowie; comedian Paul Merton would later joke that Bowie nicked their music. Seona Dancing were briefly signed to a recording contract and released two singles, "More to Lose" and "Bitter Heart". The latter was slightly reminiscent of Queen's "Body Language" from a year earlier, featuring a similar synthesizer riff. The act failed to breach the UK top 75 and earn a place in the Guinness Book of British Hit Singles, but clips have survived and they have been frequently used to tease Gervais in interviews. Despite his own lack of success, Gervais stayed within the music industry for a while and even spent time as the manager of Suede.Gervais had to wait a long time before achieving the fame he had hoped would come with a pop career. In the 1990s he formed a writing partnership with Stephen Merchant. In 2000, he landed his own comedy chat show on Channel 4, Meet Ricky Gervais (2000), which attracted legendary guests such as Jimmy Savile, Michael Winner, Paul Daniels, Peter Purves, Stefanie Powers, Jim Bowen and Midge Ure. The series only ran for six episodes but a year later greater stardom came for Gervais with the debut of BBC comedy The Office (2001). Although it was not initially received to great acclaim or viewing figures, it is now often cited as one of the greatest comedy series of all time and has been credited with reinventing the sitcom. Gervais starred as the obnoxious and embarrassing office manager David Brent, who has since been voted in various polls one of the greatest comic characters. It also prompted an American remake, The Office (2005). Gervais had further success with another sitcom, Extras (2005), which attracted a series of celebrity guests, including Ben Stiller, Samuel L. Jackson and his musical idol David Bowie. It served as a satire on the entertainment industry and leading stars were happy to play along by performing exaggerated versions of themselves.Gervais has become one of the most popular and omnipresent comedy performers of the 21st century, hosting the Golden Globe awards, lending his talent to films, becoming a voice artist and appearing on numerous talk shows. He has become one of the best known British comedy figures in America. He is also regularly the subject of controversy due to his dark comedy. Some critics have called him insensitive and outrageous. Gervais has responded by saying "offense is the collateral damage of free speech", he has said that he doesn't aim for a mass audience, he's just pleased he's managed to get one, and he has compared his style of comedy and the audience he has acquired with being Iggy Pop in preference to being Phil Collins.

David Brent: Life on the Road