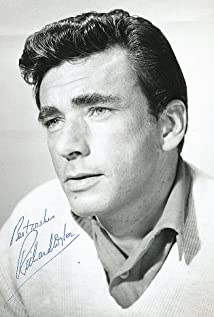 Richard Stapley, aka Richard Wyler, not only enjoyed great success as an actor and writer on both sides of the Atlantic, but managed to do it under two names as well.A descendant of Sir Richard Stapley, noted in history for signing the death warrant of King Charles I, Stapley was born in Westcliff-on-Sea, Essex, England on June 20, 1923 and made his first stage appearance at the age of 15 at Theatre Royal, Brighton. He played juvenile leads at several regional theaters until an audition for Laurence Olivier led to a contract to appear in two leading roles at London's famous Old Vic. With the heightening of World War II, however, he enlisted in the Royal Air Force and learned to fly solo.In 1946, he wrote his first novel, I'll Wear It On My Head," which was published in England, and sailed for America, armed with letters of introduction to Alfred Lunt and Lynn Fontanne from his friends John Gielgud and Cathleen Nesbitt.Through the Lunts, he landed a lead in a Broadway play, "Darling, Darling, Darling," in which he was spotted by a talent scout and signed to star in "The Challenge" for the small Eagle Lion studio. MGM bought his contract and he quickly co-starred with Lana Turner and Gene Kelly in "The Three Musketeers" and in "Little Women" with June Allyson, Janet Leigh, Margaret O'Brien and Elizabeth Taylor.He was menaced by Boris Karloff in the cult classic "The Strange Door," and made a dashing action hero in such films as "Charge of the Lancers" with Paulette Goddard and Jean-Pierre Aumont, "King of the Khyber Rifles" with Tyrone Power, "The Iron Glove" with Robert Stack, "Jungle Man-Eaters" with Johnny Weissmuller, "Target Zero" with Charles Bronson and "D-Day The Sixth of June" with Robert Taylor.Between movies, he was a frequent guest on TV dramatic shows and returned to Broadway in two plays, "Second Threshold" at the Morosco and the Theatre Guild's production of "Jane" with Edna Best and John Loder.Stapley also teamed up with composer Dickson Hughes to write a musical revue, "About Time," and three songs for the film "The Restless Breed," starring Anne Bancroft. They were then commissioned by Gloria Swanson to write a musical version of "Sunset Boulevard," in which she hoped to make a stage comeback. Production plans fell through, but Swanson did perform one of the songs, "Those Wonderful People Out There in the Dark," in a major production number on the Steve Allen TV show.Disheartened by the whole Swanson incident and ready for a change, he returned to England, where he was offered the starring role in a new TV series, "The Man From Interpol," with the new screen name of "Richard Wyler". The show was a tremendous success throughout the world, but he also found himself type-cast in that one role. He took two years off and bought three racing motorbikes and was soon competing with such champions as Mike Hailwood, Phil Read, Jim Redman and Luigi Tavieri.He returned to films in "The Barbarians" with Jack Palance and continued to star in a series of European action films including "Identity Unknown," "The Rattler Kid," "The Exterminators," "The Bounty Killer," "Two Pistols and a Coward," "The Girl From Rio" with George Sanders and Shirley Eaton and the popular spy picture "Dick Smart."While shooting "Connecting Rooms" with Bette Davis and Michael Redgrave, he showed the producer, Dimitri de Grunwald, a short story he'd written that was published in a collection that included stories by John Lennon and Romain Gary. Grunwald, who'd formed a new production company with Sir Peter Hall and Robert Bolt (writer of "Dr. Zhivago" and "Lawrence of Arabia"), optioned the story as their first movie project.Since then, Stapley, reverting back to his birth name, combined acting with his new love of writing and for 10 years was even featured in three long-running commercials for Imperial Leather soap, which was chosen as one of the best-ever British TV ads and also shown in selected U.S. cities.A chance meeting with Monte Cook at an acting audition led to their collaborating on the novel "Naked Legacy," which Stapley wrote based on Cook's life story. Stapley also completed an additional novel, "Tomorrow Has Been Canceled," as well as his memoirs, "To Slip and Fall in L.A." A new musical, "Swanson On Sunset," was also written with former partner Dickson Hughes, based on their adventures while writing the ill-fated musical version of "Sunset Boulevard." A private demo recording of the complete score, featuring Swanson in her original role of "Norma Desmond" was recently released on CD by Stage Door Records.

D-Day the Sixth of June

King of the Khyber Rifles