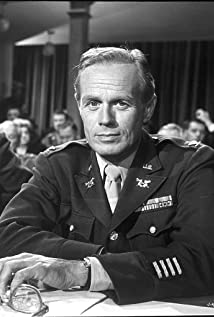 Richard Widmark established himself as an icon of American cinema with his debut in the 1947 film noir Kiss of Death (1947), in which he won a Best Supporting Actor Academy Award nomination as the killer Tommy Udo. Kiss of Death (1947) and other noir thrillers established Widmark as part of a new generation of American movie actors who became stars in the post-World War II era. With fellow post-War stars Kirk Douglas and Robert Mitchum, Widmark brought a new kind of character to the screen in his character leads and supporting parts: a hard-boiled type who does not actively court the sympathy of the audience. Widmark was not afraid to play deeply troubled, deeply conflicted, or just downright deeply corrupt characters.After his debut, Widmark would work steadily until he retired at the age of 76 in 1990, primarily as a character lead. His stardom would peak around the time he played the U.S. prosecutor in Judgment at Nuremberg (1961) as the 1950s segued into the 1960s, but he would continue to act for another 30 years.Richard Weedt Widmark was born in Sunrise Township, Minnesota, to Ethel Mae (Barr) and Carl Henry Widmark. His father was of Swedish descent and his mother of English and Scottish ancestry. He has said that he loved the movies from his boyhood, claiming, "I've been a movie bug since I was 4. My grandmother used to take me". The teenaged Widmark continued to go to the movies and was thrilled by Dracula (1931) and Frankenstein (1931). "I thought Boris Karloff was great", Widmark said. Although he loved the movies and excelled at public speaking while attending high school, Widmark attended Lake Forest College with the idea of becoming a lawyer. However, he won the lead role in a college production of, fittingly enough, the play "Counsellor-at-Law", and the acting bug bit deep. After taking his bachelor of arts degree in 1936, he stayed on at Lake Forest as the Assistant Director of Speech and Drama. However, he soon quit the job and moved to New York to become an actor, and by 1938 he was appearing on radio in "Aunt Jenny's Real Life Stories". He made his Broadway debut in 1943 in the play "Kiss and Tell" and continued to appear on stage in roles that were light-years away from the tough cookies he would play in his early movies.After World War II, he was signed by 20th Century-Fox to a seven-year contract. After seeing his screen test for the role of Tommy Udo, 20th Century-Fox boss Darryl F. Zanuck insisted that the slight, blonde Widmark - no one's idea of a heavy, particularly after his stage work - be cast as the psychopath in Kiss of Death (1947), which had been prepared as a Victor Mature vehicle. Even though the role was small, Widmark stole the picture. The publicity department at 20th Century-Fox recommended that exhibitors market the film by concentrating on thumping the tub for their new antihero. "Sell Richard Widmark" advised the studio's publicity manual that an alert 20th Century-Fox sent to theater owners. The manual told local exhibitors to engage a job printer to have "wanted" posters featuring Widmark's face printed and pasted up. He won a Golden Globe and an Oscar nod for the part, which led to an early bout with typecasting at the studio. Widmark played psychotics in The Street with No Name (1948) and Road House (1948) and held his own against new Fox superstar Gregory Peck in the William A. Wellman western Yellow Sky (1948), playing the villain, of course. When his pressuring the studio to let him play other parts paid off, his appearance as a sailor in Down to the Sea in Ships (1949) made headlines: Life magazine's March 28, 1949, issue featured a three-page spread of the movie headlined "Widmark the Movie Villain Goes Straight". He was popular, having captured the public imagination, and before the decade was out, his hand- and footprints were immortalized in concrete in the court outside Grauman's Chinese Theatre in Hollywood.The great director Elia Kazan cast Widmark in his thriller Panic in the Streets (1950), not as the heavy (that role went to Jack Palance) but as the physician who tracks down Palance, who has the plague, in tandem with detective Paul Douglas. Widmark was establishing himself as a real presence in the genre that later would be hailed as film noir. Having proved he could handle other roles, Widmark didn't shy away from playing heavies in quality pictures. The soon-to-be-blacklisted director Jules Dassin cast him in one of his greatest roles, as the penny-ante hustler Harry Fabian in Night and the City (1950). Set in London, Widmark's Fabian manages to survive in the jungle of the English demimonde, but is doomed. Widmark was masterful in conveying the desperation of the criminal seeking to control his own fate but who is damned, and this performance also became an icon of film noir. In that same year, he appeared in Oscar-winning writer-director Joseph L. Mankiewicz's No Way Out (1950) as a bigot who instigates a race riot.As the 1950s progressed, Wi

A Gathering of Old Men