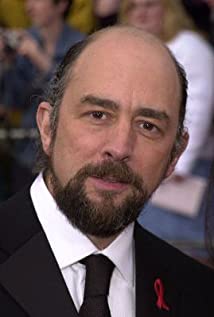 Richard was born in Bethesda, Maryland, the middle of three sons of Edward, a real estate lawyer, and Charlotte, a cable TV and publishing executive. His parents divorced when he was 12. He dropped out of high school but obtained an equivalency diploma. He tried studying at the City College of New York (CCNY) in 1973, but had no interest. After not bothering to show up for finals, he headed to Colorado where he cut firewood and lived a hippie life. He returned to New York in 1975 and started studying acting at CCNY and eventually was accepted into their theater program. He initially disliked acting and studied to be a director. He directed several off-Broadway plays, including "Antigone" with a then just-graduated Angela Bassett in 1983. He also met present wife, Sheila Kelley, during auditions for this play. The two married in 1996. In the mid-1980s, Richard says he conquered his fears and decided to take a stab at acting. He got several TV roles, but he was seen by Steven Spielberg in an episode of the TV drama High Incident (1996). Spielberg then cast him in The Lost World: Jurassic Park (1997) and his career has been on an upward climb ever since that has led to his co-starring role in The West Wing (1999).